The World Cup and National Identities

Chimamanda Ngozi Adichie said, “The idea of national games is based on the premise of national identities,” and the World Cup is a prime example of this. Every four years, the love of sport and nation collides as national teams from around the world compete for the coveted prize. However, when football teams in the World Cup have players who were born and raised outside of the countries they represent, ideas about national identity and pride can get complicated. In the 2022 World Cup, many players from diaspora backgrounds are representing their countries of origin or countries of residence. This includes Achraf Hakimi, who was born in Spain and is playing on the Moroccan national team, and Bukayo Saka, a child of Nigerian immigrants who is playing for England, where he was born and raised. Diaspora representation in events centered on national identity often creates discussions around identity, belonging, and “authentic” nationality that centers around the question: who should be allowed to represent a nation? 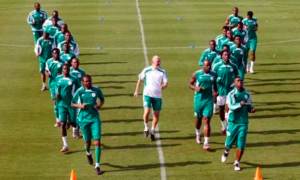 There are 136 players in the World Cup that are playing for countries they were not born in, with the five African teams having the most foreign-born players. Ghana’s coach, Otto Addo, was born and raised in Germany and played in the Bundesliga (German football league). The Ghana Football Association worked to recruit well-known Ghanaian diaspora football players in an attempt to rebuild the squad, successfully convincing five European footballers of Ghanaian heritage to switch their allegiance from their countries of birth to their country of origin. Ghana’s example of soliciting diaspora support for the national football team is representative of how governments are encouraging their diaspora populations to use their skills to support their countries of origin. Many countries have developed diaspora engagement programs to encourage their diasporas to use their skills to help build their homelands. While diaspora representation may continue to be a topic of debate, diasporas have shown that their representation can be critical to their nation’s success both on and off the pitch.

While the role of diaspora representation at the World Cup is important, there is another group that has been instrumental to the success of the World Cup: migrant workers. Migrant workers, mainly from Nepal, India, Sri Lanka, and Bangladesh, have worked on building the stadia and other infrastructure needed for Qatar to host the World Cup even though these countries are not playing in the tournament. They also provide vital services during the World Cup from cleaning to hospitality. 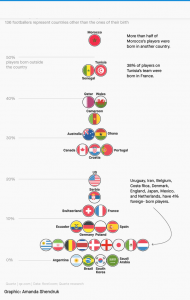 World Cup migrant workers comprise about 2% of migrant workers in Qatar. They work mainly in infrastructure construction in a harsh work environment. From 2011 to 2020, 5,927 worker deaths in the construction industry were officially reported. However, this number is not entirely accurate, as an ILO report highlighted that worker deaths ‘may have not been properly recorded’. As May Romanos, Gulf researcher for Amnesty International, stated: ‘There is a need for Qatar to strengthen its occupational health and safety standards. Although promised a higher salary by recruitment agencies, a World Cup migrant worker makes approximately $190 USD per month. Furthermore, according to Al Jazeera, wage delays and abuse have caused a ‘struggle to survive’ among migrant workers. Aidan McQuade, Director of Anti-Slavery International, said of the situation: ‘Qatar is still on track to organise the world’s bloodiest sporting event in history’.

Reoccurring deaths and other workers’ rights concerns led the Union of European Football Associations (UEFA) to establish a working group to investigate Qatar’s workers’ rights strategies before, during and after the 2022 FIFA World Cup. The working group was established to discuss the issue with football stakeholders and international organisations. The International Labour Organisation and Amnesty International launched multiple campaigns, reports, and a direct letter to FIFA President Gianni Infantino, asking him to deploy FIFA’s influence and prevail on Qatari authorities to revisit their standards and establish new policies to end World Cup workers’ exploitation. Additionally, European footballers have been protesting during football matches in an attempt to shed light on Southeast Asian workers’ exploitation and human rights abuse in Qatar. In 2022, Human Rights Watch launched a campaign titled #PayUpFIFA asking FIFA to compensate for the abuse, terrible work and living conditions workers endured, lost lives, and wage theft since 2011. As of 2022, Qatar’s government have yet to fully adopt the changes stated by the government regarding job transfer and minimum wage levels.

The UEFA Working Group on Human and Labour Rights is a group formed by 11 European football associations represented by members from different European countries UEFA paid three site visits from 2021 to 2022, prior to the start of the FIFA World Cup tournament. During their visits, the UEFA working group had meetings with the Qatari Ministry of Labour, the Hospitality Sector Working Group, the International Labour Organisation (ILO), the National Human Rights Committee, the Centre for Sports and Human Rights, and FIFA, as well as migrant workers from multiple nationalities across different sectors

The first site visit by the UEFA Working Group was in August 2021, to set up a roadmap to achieving their main objectives, and the second site visit was in December 2021, almost a year ahead of the tournament. The execution of the following main outcomes was discussed during the third site visit in June 2022 regarding labour laws and the Kafala system reforms. However, these reforms have yet to be fully implemented, according to the site visit summary report.

Finally, FIFA was asked by the UEFA working group to “respond and commit to the outstanding issues regarding migrant workers by the end of October 2022.” (UEFA, 2022).

The unjustifiable treatment of migrant workers in the run up to the World Cup caused much controversy for FIFA and Qatar. Football fans from around the world have been debating if they should boycott the 2022 world cup, Qatar, and FIFA, claiming that ‘this is an immoral, false tournament’. Many cities in Germany, France, and Spain decided not to broadcast the 2022 World Cup in public settings in protest of alleged human rights abuse. Boycotting the 2022 World Cup in Norway was already under way during the qualification stage when the Norwegian national team shed light on the treatment of migrant workers; however, after a vote, Norway decided against boycotting the 2022 World Cup but continued protesting with the German team “Human rights on and off the pitch”.

These controversies and criticisms have drawn a range of reactions from Qatar, as well as other states involved in the World Cup, about the need to not politicise the tournament, but also the hypocrisy of Western states lecturing Qatar on migrant rights, when their own treatment of migrants and asylum-seekers is far from exemplary. One journalist even claimed that Qatar was starting to regret hosting the World Cup due to all the negative publicity it had received.

On the occasion of this year’s International Migrants’ Day, we should recognise the critical role of migrants and diaspora in making the World Cup such a success in Qatar, from the migrant workers who built stadia and other infrastructure projects to the highly talented diaspora players who shaped the top teams in the tournament, giving untold joy to billions around the world.

Both migrant workers and diaspora players had to make sacrifices and difficult decisions to seek new opportunities and livelihoods, and represent and support their countries and communities. They do this day in, day out, without fuss or fanfare, supporting over 1bn people worldwide. Diaspora football players have platforms, and FIFPRO, FIFA, UEFA, and other entities to protect their rights. Migrant workers, on the other hand, need publicity and representatives to monitor and report on migrant workers’ protection systems.