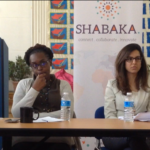 Diaspora, Moving from Potential to Action

To contribute scintillating and important debate around the role of diaspora in development and humanitarian action, it’s important to firstly ensure that the agency and capacity of second generation diaspora/children of migrants is given the (literal and metaphorical) space to flourish.

That was our motivation, when on 6th May, we brought together second generation diaspora individuals to discuss the motivations, challenges as well as opportunities children of migrants face when it comes to engagement in the humanitarian and development sector.

Panellist and attendants described their own experience as second generation diaspora, and what challenges they faced. It was striking how many similarities the group shared in terms of their experience even though they ranged in age, gender, cultural and professional backgrounds. Many talked of the challenge of straddling multiple identifies, and how it impacts on them being able to finding a space where they can feel welcomed and included. Those from conflict affected countries also spoke of the need to create space where open dialogue and networking can happen without the tint of politics.

Across the board, participants agreed that while second generation diaspora are agents of change, they face issues of visibility within the aid and development sector. While steps can be and should be taken to facilitate for diaspora to become system leader, telling their own story through strategic engagement at  policy level, the important point was also raised that we should not labour under the illusion that there is a silver bullet that will bring about development for all, acknowledging that  development is a systemic challenge and until we deal with the root causes rather than the symptoms by working together collaboratively,  we will not begin to make an impact.

Genuine engagement in development and humanitarian response is a challenge for diaspora whose countries of origin have governance and system challenge that stops initiatives and projects succeeding. It’s clear from our research and discussions that some short, medium and long term steps can be taken by second generation diaspora individuals and diaspora organisations to ensure that they are creating the spaces, visibility and networks needed to truly be included as system leaders and change agents. First and foremost, establishing lines of communication within and between diaspora individuals and organisations is critical for creating an effective partnership. Organisations coming together to form an umbrella entity that can reach out to and share information with as many diaspora members as possible. This will ensure that not only are individuals aware of activities are being undertaken, but they can easily join these initiatives and mobilise those within their networks to do so as well.

Where there continues to be knowledge gaps about how, where and why second generation diaspora are not engaging in development or humanitarian response, we as an organisation recognise that we can step and through research can contribute to building an evidence based picture that shines a light on the agency and capacity of those living in the diaspora.

If you are so enthused by our (potential) plans, regardless of where you are in the world, just get in touch and we can take it from there!