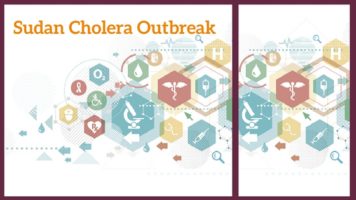 In Sudan, the combination of the governments denial of a cholera outbreak and a collapsing health care sector is forcing local actors and diaspora to lead the response

Since August 2016 a cholera outbreak has been sweeping across Sudan. The outbreak has continued unabated and turned in to an urgent crisis with cases reported in rural and urban areas across the country including Blue Nile, Sennar, El Gedaref, Kassala, Red Sea, Northern State, River Nile, Khartoum, North Kordofan, El Gezira, White Nile states and Darfur province. As of time of writing,  almost 24,000 people are suspected to have been infected and 940 have died of the infection, and with the rainy season about to start, there are no clear signs of it halting soon.

The epidemic has further exposed significant deterioration in health access and health system deficiencies that have gone largely unattended for years in Sudan leading to absent or weak communicable and non-communicable disease surveillance as noted by a recently published report. Hospitals are overrun, medicine is either unavailable or unaffordable and local health workers remain under resourced and under trained.

While an emergency response is needed to prevent further escalation of the cholera epidemic in Sudan, it is also important to consider the longer term implication, specifically the need for continued investment not only in emergency response, but also in building the long term infrastructural capacity of the country’s public health response.

The refusal of Sudan’s governments to declare a cholera epidemic has meant that there is no centralised efforts to organise a response at the current time, leading to months having been wasted and lives being lost. This gap in response is being filled by organisations and individuals on the ground, as well the Sudanese diaspora who has also mobilised on the issue in influential ways. The Sudan Doctors Union UK & Ireland (SDU UK&I) have for several months been playing a central coordination and communication role in responding to the outbreak, supporting local groups and organisations with training, financial and medical resources. While the efforts by medical professionals inside and outside Sudan have focused on responding to the cholera outbreak by supporting health workers, running education campaigns and distributing medical supplies. However, there continues to be an urgent need for media driven information campaign to raise awareness about preventing the spread of the disease. Currently, an informal but restricted awareness campaign consists of the distribution of flyers to schools and health centers. The SDU UK & I continue to support local efforts to halt the spread of the disease and have so far raised funds from donations, collected data and mapped locations and number of cases across the country, provided training to up to 800 health workers and several school teachers.

Diaspora communities, particularly the health workers, are well placed during public health emergencies to offer humanitarian assistance as they have access to first-hand information as well as networks in their country of origin, meaning that they are well placed to provide access and respond immediately where the need is. For example, the response to the Ebola outbreak in West Africa. Their understanding of the context of the crisis as well as established connections with the affected populations means that diaspora can play a vital role as bridge builders between international organisations and local communities during humanitarian response, particularly in bringing about informed decisions, reaching the population in need, and being able to diffuse vital messages.

Despite the efforts of local groups and organisations in Sudan, with support from the diaspora, without large scale and integrated response on the ground, efforts remain limited in making a real impact on halting the spread of cholera in Sudan. With lack of action by the Government of Sudan, it has become critical that national and international health organisations coordinate their efforts and act immediately to respond to the crisis as the number of infected cases as well as death toll increases rapidly. This sense of urgency is even more critical with the imminent arrival of the rainy season and the reopening of schools after the Eid break. If any lessons have been learnt from previous epidemics, it is that reluctance to act swiftly and make concerted efforts towards halting the spread of cholera  can lead to catastrophic consequences that impacts the population far beyond the immediate impact of the disease itself.

The immediate need now is for humanitarian partners and agencies to push forward with convincing the governmental agencies in Sudan to support an epidemic declaration in order to allow for an intensive response that includes the setting up of treatment centers, provision of cholera kits, and water purification supplies and training of front-line doctors, nurses, and other health workers. And for international donors to support these efforts to ensure no more lives are lost.

For more details about the Cholera  outbreak in Sudan visit: https://www.acaps.org/country/sudan/special-reports#container-902[/vc_column_text][/vc_column][/vc_row]