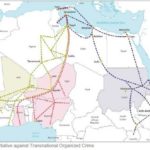 By Bashair Ahmed and Salih Amaar

According to a Sudanese government official, Ismail Omer Tirab, ‘the EU wants Sudan to be a large prison for migrants’. This allegation was made in light of bilateral deals between European and African countries to curtail the flow of migrants to European shores. The deal involves a mixture of financial and capacity building support to maintain border controls and strengthen the investigation and prosecution of smugglers and traffickers. There has been some criticism of these deals, which sees the European Union (EU) as paying countries with dismal human rights records to keep migrants within their borders to stop them coming to European shore.

Tirab, a member of the Sudanese government National Committee to Combat Trafficking, was also critical of the deal that is worth €100 due to the focus of the funding. He attributes to the lack of committee’s accomplishments to the EU’s focus on security rather than broader protection of migrants ‘[The EU] are not interested in us. …. we are not important for them, visiting us [during an official visit to Sudan] was just a formality’.

In light of the EU- Sudan migration deal, Sudan reportedly deported hundreds of Eritreans despite being at risk of imprisonment, forced labour and torture according to a Human Rights Watch report. But despite a journey filled with dangers- whether it is the unforgiven desert terrain, traffickers or fear of arrest by the police- this has not deterred would-be migrants with more than 350,000 already made the journey to Europe.

Why are migrants leaving Sudan?

The number of refugees and asylum-seekers in Sudan is growing, which according to UNHCR in 2014 numbered at 277,833 and in 2015 this figure has increased to more than 300,000. However, many leave the camps seeking to travel elsewhere or look for employment in the main cities. Hamad Aljazouli, Director of Sudanese Commission of refugees (COR), estimates around 170,000 people were registered as refugees in camps in eastern Sudan between 2013 and 2015 but half of them are not no longer there.

Yafet, an Eritrean refugee in Khartoum describes how conditions are often dangerous in camps ‘[refugees] often refuse to the stay in the camps because of the conditions. The wait is terrible and the Rashaida** surround the camp and kidnap people’.

Migrants in urban setting, including Khartoum, don’t fare better. Apart from the challenges dangers facing migrants crossing Sudan’s border, the continued economic deterioration, political impasse and conflicts on multiple fronts is also negatively impact. ‘Refugees here are struggling to make a living, even Sudanese people are struggling to make a living and they have many political and economic problem, forget about us foreigners’, Yafet went on.

‘Life in Sudan is very difficult, I work for many hours and I am always scared of being picked up by the police as I am here illegally’, said Sarah*. A 22 years-old waitress in Khartoum who left her native Eritrea in mid-2015 and arrived in Sudan seeing it as an “easier route” to reach Europe despite the risks.

Many migrants in Sudan largely depends on their relatives in the diaspora, ‘Most of the [migrants] depends financially on families living outside of Sudan in Europe, Australia and the United States’, said Sarah. Yafet also highlights this point, ’there are no work opportunities [in Khartoum] because [migrants] don’t have official papers or have the right skills. Most of them depend on their families living abroad in Europe, Australia and the United States’.

The pressure of migration to and through Sudan, coupled with economic and political crises in the country is leading discontent among Sudanese ‘We are fed up with all these foreigners here, they don’t benefit the country with anything……they work here and send all the money they make to their countries’ said Abdelrahim, a causal worker in Al jereef. ‘They are squeezing Sudanese out of the jobs market’, said Abdallah, a Shopkeeper in Al Daim.

The differencing treatment between different migrants is also observed ‘some nationalities like the Syrians are treated better than other foreigner, like Ethiopians’ said Nazir, an office worker in Al Sahafa.

EU- Sudan migration deal- is it paying off?

Despite the concerns and challenges, a progress report by the European Commission has alluded that the deals are paying off. This includes, for example, supporting Ethiopia to provide livelihood opportunities for refugees. In Sudan, several officials noted that the number of Ethiopian and Eritreans arriving in Sudan has dwindled, but no concrete data to confirm this.

The Sudanese government appear to have started to change tact on how to deal with migrants in Sudan. In eastern Sudan where security around the refugee camps are reported to have been bolstered following cases of kidnapping incidents by human traffickers targeting refugees in and around the refugee camps. The Sudanese government is also reportedly pursuing a policy of returning Eritrean asylum seekers back to Eritrea without allowing them the opportunity to register as refugees, contravening international laws. Additionally, the government has deployed the Rapid Special Forces (RSF) to patrol the Sudan-Libya border, a force considered to have committed grave human rights violations in Sudan,  have reportedly arrested 600 Ethiopians attempting to enter Libya on 30 July 2016, and more recently the RSF announced they have intercepted 1,500 undocumented migrants.

With almost daily reports of migrants losing their lives as they navigate the journey to Europe, escaping everything from war, persecution and poverty, 2015 and 2016 have seen the so called ‘migrant crisis’ taking centre stage in European politics. In response to a surge of migrants and refugees arriving to European shores, coupled with a lack of a unified political response to the crisis, the EU has taken drastic steps to take control of the situation, including striking deals with governments it once condemned for poor human rights records.

The Valletta Summit on Migration, held in Malta in November 2015, aimed to address so the European migrant crisis, which resulted in the EU establishing an Emergency Trust Fund to promote development in Africa, in return for African countries to help out in the crisis. Under the EU’s Emergency Trust Fund for Africa, African countries are provided with packages of financial and capacity building assistance for “better migration management”. This is followed by an informal EU summit in Malta in February 2017, which is focused on stemming the flow of irregular migrants from Libya to Italy. However, there are strong criticism and concerns regarding the detention of undocumented migrants with conditions described as inhumane by the United Nations Support Mission to Libya (UNSMIL).

Sudan is a major thoroughfare for migration from East and Horn of Africa and a growing source of migrants to Europe. As part of the Fund, Horn of Africa countries, including Sudan, are set to benefit from an investment of €170 million Euro to address irregular migration in the region.  The aid package includes projects to address instability and forced displacement in Sudan’s regions of Darfur, South Kordofan and Blue Nile as well as eastern Sudan.

* Not her real name