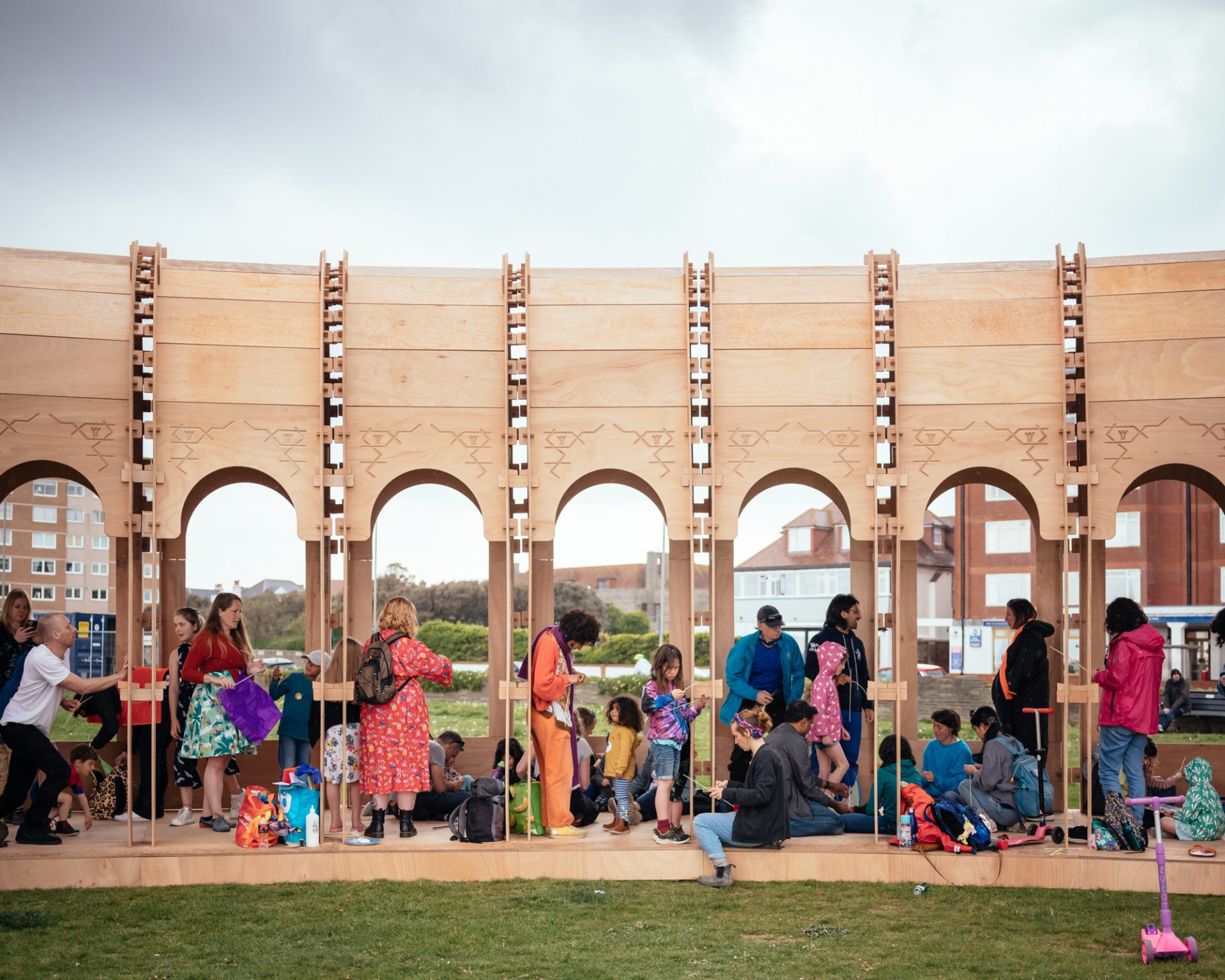 Riwaq at the Brighton Festival 2022

The Riwaq is a pop-up venue structure designed and constructed by Architects Marwa Al Sabouni and Ghassan Jansiz, and Theatre Artist Tristan Sharps. The structure mimics the traditional Islamic Riwaq, a public space for exchanging cultural knowledge. The theme of the Riwaq was إعادة بناء to rebuild, in Arabic. As part of the annual Brighton Festival, the Riwaq hosted a diverse range of  programs, events, workshops, and activities in May 2022. These brought together artists and writers to showcase their work and interact with locals and visitors.

Marwa Al Sabouni is a Syrian architect and author based in Homs – Syria, who has strong links with a network of Syrian diaspora architects in the UK and who is also a Guest Director of the Brighton Festival 2022. At a Brighton Festival event about Rebuilding Cities, Marwa talked about the philosophies of Islamic architecture and Islamic cities, specifically highlighting how architecture is a crucial actor in peace building and decreasing conflict.

The main areas of the discussion focused on rebuilding cities impacted by conflict, which was the topic of her recent book Building for Hope,. As an architect, Marwa questioned what a sense of place is, and discussed what elements make a city by focusing on architecture, history, public spaces, and the sociology of architecture within the context of conflict. The central theme of the book stems from the architect’s journey of rebuilding her home city of Homs, but she also focuses on the visual and aesthetic elements of architecture and their impact on society. Marwa attempts to define and pinpoint what people find attractive about a specific style, shape, or decorative element and encourages people to name their own sense of preference and values.

Marwa gave a powerful example of a dead city, Homs, her home city and where she is still based, that has been largely destroyed or ‘killed’ by conflict. Rebuilding Homs is Marwa’s own personal battle for home, as she explains in her book The Battle for Home: The Memoir of a Syrian Architect. As part of the discussion, she highlighted issues faced by locals in Homs that keep the city dead, such as class division, sanctions, warlords, and lack of electricity, energy, and petrol. In addition, she raised the challenging economic situation and inflation that caused people to move out of the city. This has resulted in a static state of no rebuilding and the city has been reduced in size. As a result, she described the current situation as one of ‘live or die’ with no room for rehabilitation or renewal.

The sense of Home vs Housing

Drawing on her experiences of the situation in Homs, Marwa went on to outline the differences between Home and Housing by stating that ‘home’ is a sense of belonging, it is about how home treats us, and how we connect with a home. By contrast, ‘housing’ is a marketized concept that the young generation increasingly has no access to in Syria, and elsewhere.

During a lively Q&A session, the discussion focused on the experience of refugees in refugee camps in Jordan vs Egypt. Jordan is home to one of the world’s largest refugee camp, the Al-Zaatari refugee camp. This was set up to respond to people displaced by conflict in Syria and is the largest refugee camp in the Middle East, with over 80,000 residents, the size of a medium-sized city. Keeping in mind that the average stay in a refugee camp is 25 years, an audience member asked:

Why don’t we transform refugee camps into cities?

Humanitarian aid experts believe that refugee camps like Al-Zaatari, the largest camp for Syrian refugees, can be transformed into a city. On the contrary, Marwa is convinced that cities are designed to accommodate as a long-term place of settlement to build a sense of home. Refugee camps are the opposite of settlement, refugees do not plan or intend to establish roots in a camp city that has a sense of temporary housing. Temporary housing lacks the essence of settlement, it is not a home. Moreover, the economic opportunities available to Syrian refugees in Jordan are very limited.

Marwa’s writings elegantly emphasise the tension and creativity between Diaspora conceptions of ‘home’, between the hopes and dreams for an eventual return that may or may not come, and establishing roots in a new place and learning to call it home. Marwa also draws attention to the difference between a ‘home’ that is built and designed based on your needs and is tailored in relation to how you connect and make sense of society and the practicality of living in that specific location which is gradually transforming to accommodate society’s needs. Temporary housing, refugee camps, and displacement resemble the diasporic experience of fabricating a ‘home’ to attain a sense of connection with a place and its surroundings. Marwa’s writings also underscore how ‘home’ is also where the heart is and is not always simple or singular, it is usually linked to broader individual meanings and definitions, which Marwa seeks to pinpoint.