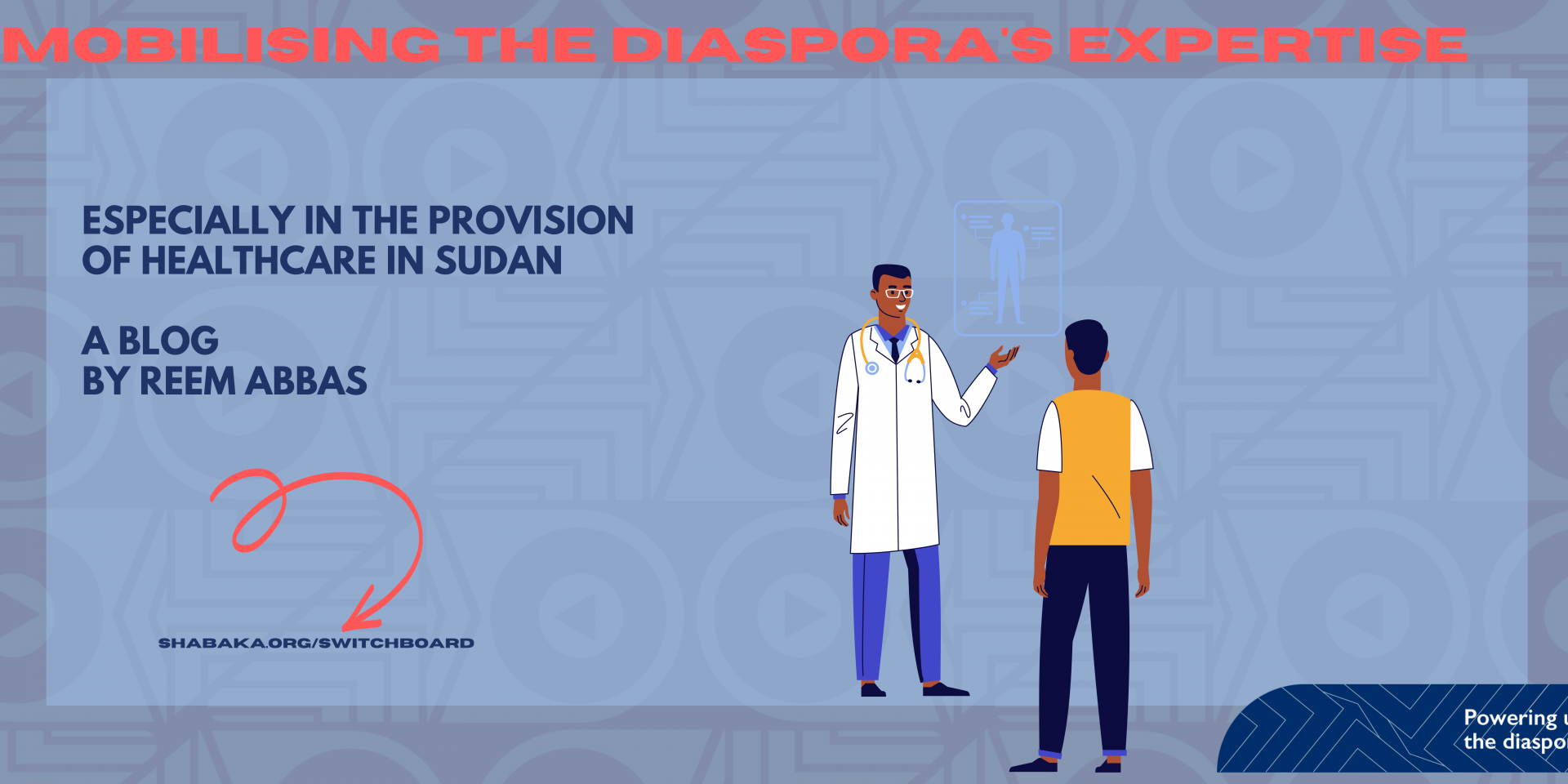 How the Sudanese diaspora mobilises its diverse expertise  

Sudan is the third largest country in Africa with a total area of 1,882,000km2, a population of 42.8 million, and a young workforce. The country is rich in natural resources, fertile land, and agricultural opportunities. For most of its independent history, Sudan had internal conflicts that hindered its ability to invest in its natural resources and huge untapped wealth. The secession of the oil rich South in 2011 resulted in a 75% decline in oil income which ultimately led to rising inflation and a landslide devaluation of the currency. These complex conditions and the controversial budget expenditure by the ruling army continuously prioritised military expenditures over health and education, and consequently kept the country’s health care sector both underfunded and understaffed.

Tired of military dictatorships and wasted potential, Sudanese people from all walks of life, predominantly led by women, took part in anti-government protests demanding the end of military dictatorships and the establishment of a civilian-led government that fulfils the people’s aspirations for democracy and the rule of law. In April 2019, Omer al-Bashir who has been in power for 3 whole decades was finally toppled. However, the establishment of a civilian-led government remains to be challenging due to the refusal of the military and armed militias to hand over power to civilians.

Amidst these daunting circumstances, grassroot initiatives supported by the Sudanese diaspora became pivotal in filling the overwhelming gaps in social services. The Sudanese society is one in which the culture of giving is deeply rooted and is known for having an outstandingly intact social fabric. When Malcolm X visited Sudan in 1959, he expressed how impressed he was by what he witnessed in Sudan.

“Their religious piety and hospitality are unmatched anywhere. I really felt at heaven and at home there.”

Among the Sudanese diaspora, countless groups organised themselves forming initiatives aimed at responding to the dire needs back home. From education to mental health support, to healthcare, the diaspora, aided by digital technologies and social media platforms stood up to its highly expected role.

Sadagaat, for example, is a name that is now widely linked to helping disadvantaged communities in Sudan. The organisation started as an initiative by Sudanese professionals in the United States who came together to raise funds to assist their communities back home. Over the years, this group grew into a wide community that utilises social media platforms such as WhatsApp, Facebook, and Twitter not only in fundraising, but also for establishing trust between them and the donors. Through its successful crowdsourcing strategies, bulletproof documentation, and unquestionable transparency, Sadagaat community delivers projects related to water supply and environmental sanitation, healthcare, education, food provision, and housing. In 2021, Sadagaat’s budget added up to more than 3.75 million USD, 75% of which are donations from Sudanese individuals and diaspora communities. These funds benefited around a million individuals.

Digital communication through smart phones and social media platforms has the ability to offer the fast and cost-effective connectivity necessary for crowdsourcing activities. The experience of Sadagaat shows the extent to which technology can be a catalyst for facilitating healthcare remotely. Mobile apps are another tool that proves to be pivotal for communication and money transfer. Their potential to connect healthcare providers and facilitate crowdsourcing at times of uncertainty and political turbulence is huge. In such circumstances, technologies such as teleconsultation could be a game changer when face to face communication is not possible or recommended. Teleconsultation refers to interactions that happen between a clinician and a patient for the purpose of providing diagnostic or therapeutic advice through electronic means. In Sudan, clinics such as Bait Al-Afia are starting to use tele-consultation in Wad-Medani city. Patients are initially ‘seen’ by a dermatologist via video conferencing thus minimising the cost and hassle of taking the trip to the doctor. Where appropriate, teleconsultation is cost-effective, convenient, and sometimes safer.

Teleconsultation takes another different form in Sudan. On the 25th of October 2021, the road to democracy has once again been obstructed by yet another military coup. The late Tayeb Saleh, likely Sudan’s greatest writer of the twentieth century once said:

“It is in our nation’s nature to resist arrogance and authoritarianism by showing a taciturn contempt, until our cup overflows and we run out of patience. Then we erupt all of a sudden, like the floodwaters of the Nile or the hurling sandstorms of the Nubian Desert. We did that to the Ottomans, then to the British and to our own national rulers.”

Since the very first hours of the 25th of October, streets in Sudan have raged with resistance and refused being dragged back to square One. Demonstrations denouncing the coup have never ceased since then. Sadly, but not surprisingly, peaceful demonstrators have been shot at, targeted by live ammunition, and denied medical aid for no reason other than exercising their constitutional right to demand freedom, peace, social justice, and the rule of law. In response, over a hundred Sudanese doctors from all around the world organised themselves and formed a virtual response taskforce over WhatsApp with the aim of supporting their medical professional colleagues in Sudan. The taskforce works by uploading patients’ clinical images and reports to the WhatsApp group. The group coordinator produces a brief report and forwards it to the appropriate subspecialty group which includes the consultant looking after the case in Sudan. Discussions take place among the medical team, and the group jointly decides on the best course of treatment for the referred patient. This group of physicians collaborates with the Hadhreen organisation which involves volunteers in Sudan and fundraisers in all corners of the world. Hadhreen heroically looks after more than four thousand victims, the majority of whom are between 18 and 25 of age.

Several medical professional initiatives exist among the Sudanese diasporas. One group that has substantial input is the Sudanese American Physicians Association (SAPA). The association was formed with the aim of strengthening professional links among Sudanese doctors in the United States as well as collaborating with physicians and healthcare organisations in Sudan. With specialists in medicine, surgery, paediatrics, psychiatry, and neuroscience, SAPA secured funding for several projects including the establishment of a COVID-19 response taskforce, reviewing health proposals, outlining educational capacity building courses, conducting trainings and workshops, and securing medical materials.

It is evident that these beautiful examples of solidarity would not have been able to deliver on such large scale without utilising communication tools including social media and mobile apps. It is therefore paramount that these tools are prioritised when thinking about raising the profile of healthcare in Sudan. Efforts of the Sudanese diaspora to support the health sector in Sudan align with the goals of emergency/disaster management.  Emergency management refers to the process of coordinating an emergency or its aftermath by communicating with participants and organising the deployment and use of emergency resources. Disasters, unlike emergencies, exceed the ability of the affected community or society to cope using its own resources. In such circumstances, effective communication among emergency response stakeholders is vital for sharing information around needs assessment and coordination of response activities. This realisation led Sudanese researchers in the diaspora to explore new and innovative approaches relevant to the circumstances in Sudan. Results around effective information exchange approaches and frameworks for enhancing communication in disasters have been recommended. Nevertheless, lack of official data registries is a major challenge that needs to be urgently addressed. A recent doctoral study conducted by a Sudanese researcher highlighted that Sudan lacks a cancer registry that covers the population on a large scale, and as a result, developed a cancer registry which incorporates variables of enormous importance in the cancer research domain. The importance of collaboration and knowledge sharing in the context of disaster response cannot be stressed enough. Currently, a doctoral study by a Sudanese researcher in New Zealand aims at identifying the enablers and information and communication technologies required to develop a disaster resilience knowledge network on a national level. These studies and many others highlight the need to prioritise investment on scalable and cost-effective digital technologies for humanitarian response. E-health technologies including solutions for healthcare services and surveillance, has the potential to transform healthcare systems and improve the quality, accessibility, and cost-effectiveness of healthcare services. Projects around telemedicine, mobile clinic units, utilisation of geographical information systems for visualising health data, and of course social media have the potential to transform the healthcare landscape in Sudan. The Sudanese diasporas realise the huge potential of these technologies and continue to explore ways of establishing more successful cross-border collaborations to leverage them. However, operational challenges behind the scenes of these success stories are overwhelming. Economic restrictions on financial transactions to and from Sudan is one huge obstacle that hinders the flow of support from several communities in the diaspora. Bureaucracy and scrutiny maintained on civil activists adds to the pressure, not to mention the brain drain behind understaffing in Sudan’s health sector. Nevertheless, the diaspora remains key in responding to the challenges lived by millions in the land of Kush and although the road to a well-established democracy in Sudan is a tough one, the people remain defiant as there is no turning back.