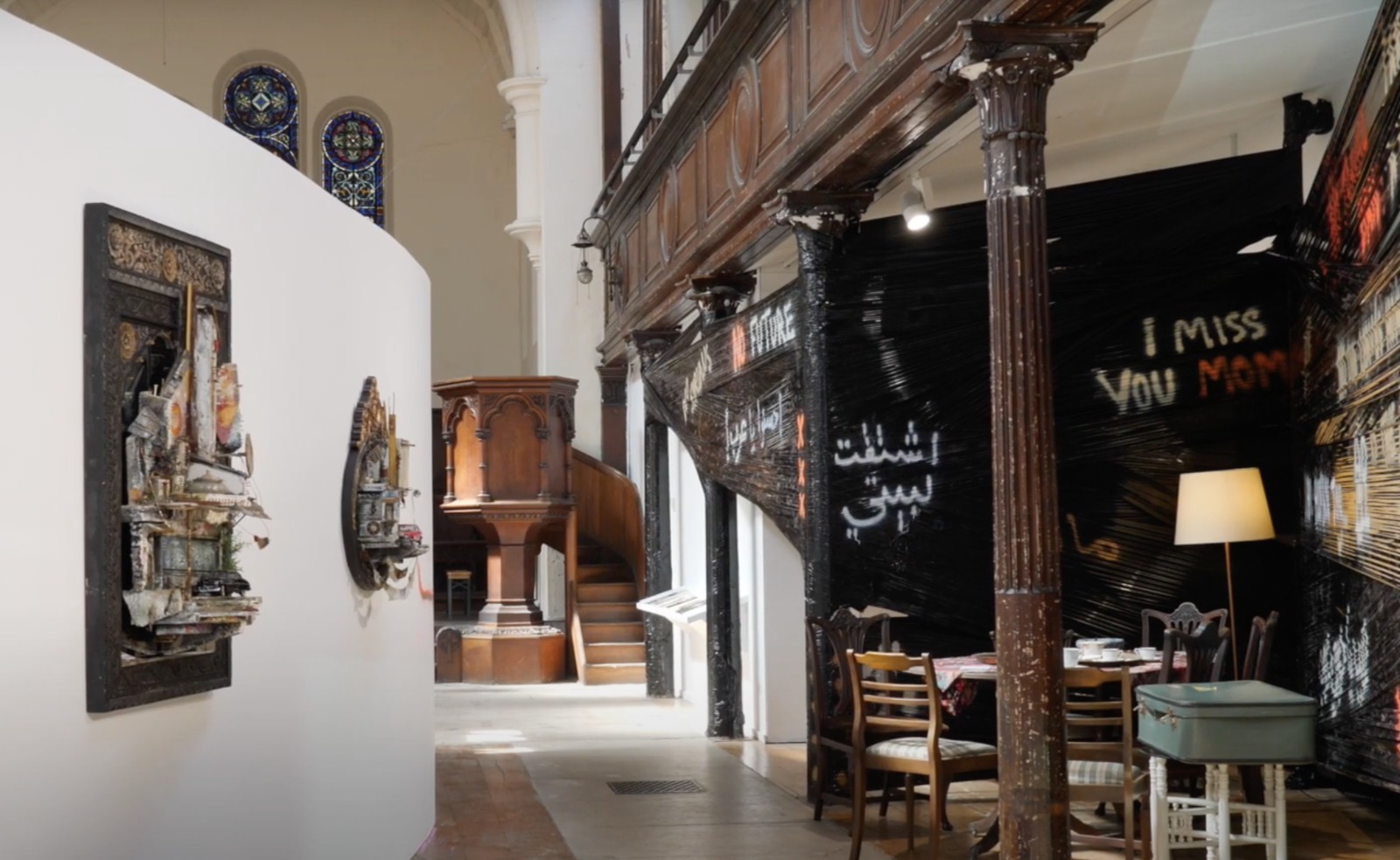 If You Can’t Go Home, Why Don’t You Make Home

Journeys from an Absent Present to a Lost Past was an exhibition of artworks by Mohamad Hafez, at Fabrica Gallery in Brighton, UK as part of the Brighton Festival 2022. Mohamad Hafez is a Syrian architect and artist based in the USA. The exhibition included several installations telling stories of homesickness, nostalgia, displacement, longing and belonging. His art also covers topics on humanizing  the word refugee and the lived experiences and journeys of refugees. His creative and distinct manner of storytelling has also been featured in acclaimed exhibitions, art and architecture magazines, articles, and radio interviews.

A short documentary about Hafez by The NewYorker  was shortlisted for the Oscars’ Best Documentary Short Subject, A Broken House shows the artist’s journey in architecture in Damascus, his home city, drawing on his memories to tell the stories of generations of people who built and lived in this city. Damascus’ rich history is reflected in its streets and architecture, influenced by the Biblical and Islamic eras, Greek, Roman, and many other civilizations that have shaped the city. Hafez built miniatures and sculptures of the city from mixed-media materials he collected throughout the years from antique shops, building materials, paint, toys, and miniature furniture.

Through his art, Hafez seeks to reflect the human aspect that created the city before the inhumane war that destroyed it. The art pieces are collections of small, detailed scenes of local shops, houses, and streets with parked cars in the neighborhoods of Damascus after the war. This vivid depiction is displayed using Victorian-style gold frames. The miniature walls are decorated with Qur’an verses, famous sayings, and proverbs written in Arabic calligraphy, while the call to prayer, the athan, is played from another installation, the Damascene Athan. The exhibition’s atmosphere brings a nostalgic feeling that has a broader resonance for diasporas and people whose countries of origin have endured war or destruction, or people who live with homesickness but cannot return home. The exhibition also has special significance for diasporas from the Middle East and North Africa who share similar cultures, languages, rituals, and religions, as these touch on family and community connections and collective traumas. Hafez’s work generates a contradictory state of nostalgic emotions and reality. His depiction of war and homesickness are real, but the emotions his art generates originate from a lost past.

Hafez talks about his experience of homesickness and the sacrifices he had to make to stay in the USA and to stay out of the Syrian conflict. His constant feelings of loneliness and separation were the heaviest sacrifice, but this helped inspire his artistic expression of the home he imagined.

Hafez started building his first miniatures of Damascus before the war to reminisce on the home he left. Unfortunately, when the civil war destructed Damascus, He distorted what he built to reflect reality; as it no longer aligns with his imagination. War changed all the memories he had and changed him and how he perceives his home Damascus. Hafez describes his feelings of longing as “extreme homesickness to a homeland that never existed or no longer exists”.

He is constantly questioning home and what it means, is it a geographical location, and could there be more than one home?

Establishing links to multiple homes or places is a normal part of the diaspora experience, which is referred to as Place-polygamy (Beck, 2002). Diasporas have family, roots, and connections in various locations that strengthen their ties to multiple places. Diasporas also connect through their differences and shared experiences of belonging to multiple locations, identities, or cultural identities i.e cultural identity polygamy.

The exhibition exposed how common it is to belong to multiple homes on various levels, and how each place ‘home’ has different connotations tied to it based on your experience in that place, or perhaps who is based in what you consider home. Although Place-polygamy is common, the journey of discovering a sense of belonging has distinct individual processes. Visitors from different nations interacted with the installations not only because they found something they can identify with, but because they found something that reminded them to reflect on what they constantly questioned and sought.