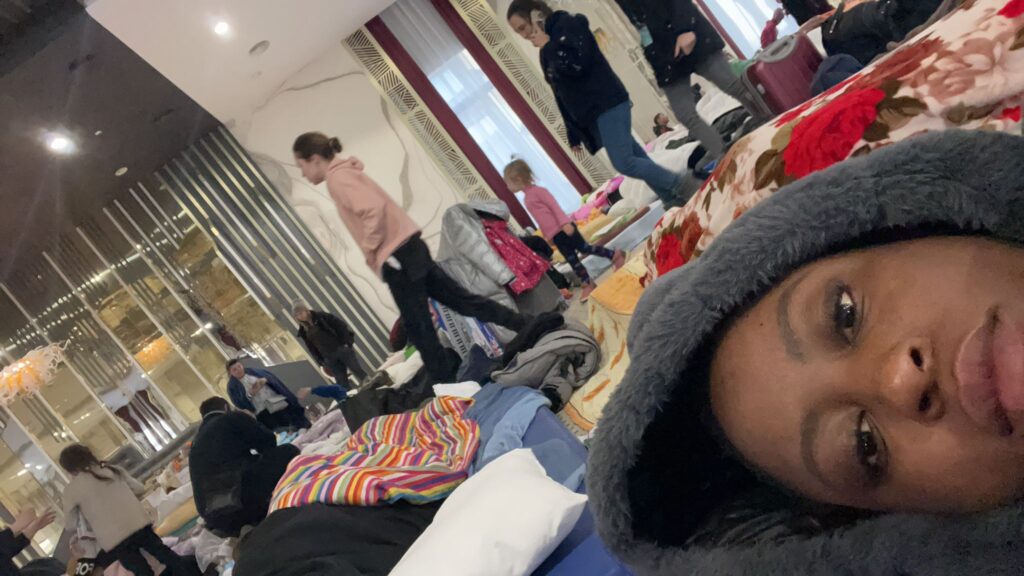 In conversation with Korrine Sky

Shabaka had the privilege of speaking to Korrine Sky, a medical student who was studying in Ukraine. She, like many others, had to flee Ukraine and was faced with the uncertainty, hostility, and racism that many have experienced on the road, on trains and buses, and at the borders.

After her experience, Korrine, along with two other women, founded Black Women for Black Lives (BW4BL) – an initiative focussed on helping Black students in Ukraine evacuate, by offering support and funding. They acted as an intermediary at first, connecting those who wanted to send money, directly with the students who needed the financial support.

The main mission for BW4BL according to Korrine was, “to help the students evacuate, and meet their immediate needs whilst leaving Ukraine.”

Korrine saw a vacuum and the lack of response from officials and organisations. There was no information given to non-Ukrainians, for whom identity documents were required, and whether the open-door policy was also for Africans. The first issue they faced was in trying to contact different embassies, which was a struggle she said, phone calls and emails were not being answered, “it took a lot of social media bashing,” were her words.

Not until the next day, was it eventually announced that all nationals could enter Poland without a passport or visa.

When they finally spoke to the embassies, the British embassy included – the advice they received was, “make your way to Poland, once you arrived in Poland, then we will see if we can help you.”

However, there was no assistance arranged to help the students evacuate, and no financial or physical support was provided.

The Ukrainian government had organised free buses, and when the free buses would arrive, the bus drivers would say, “no foreigners” or “no Black people,” “only Ukrainians,” and in other instances, other nationals would be pushed off the trains by citizens.

A Nigerian student in Sumy, Ukraine, said in a video he shared on twitter, that his school had provided three free buses, but they were only for Chinese students, “no buses for African students,” he says, “I don’t understand, are we not paying the same school fees?”

He also stressed that the drivers in Ukraine are asking for 2,000 Nigerian Naira, for a three-hour journey, which is equivalent to £3,686. Many of the students do not have that amount of money, leaving Sumy and many others resigned to sleeping in the underground to stay safe, with very little access to food and water.

Korrine also said they were in the queue for three days, in a long line of cars that was hardly moving as they were waiting to enter Romania.

She noted that when they arrived at the border, the racism they faced was perpetuated by a citizen, but it was dismissed and encouraged by the guards, and these were not isolated incidents but occurred across the whole country.

In a video Korrine posted on twitter, she said, “there’s been a lot of segregation and racism –for the people who actually get to passport control, there seems to be a hierarchy, Ukrainians first, Indians second, and Africans last.”

Despite the racism and segregation, they faced, she wrote on Twitter, “I will never forget the warm welcome we received in Romania and for that I am forever grateful.”

While waiting to reach the border, Korrine created a telegram group chat for international students, where it was repeatedly highlighted by numerous students that they could not leave because they did not have enough money or a means of transport.

As of April 11, the last students who were in Kherson are said to have left, and BW4BL assisted in the evacuation with Movement on the Ground and Team Humanity. Since there’s no remaining students that need to be evacuated and need support, their mission has now been fulfilled she emphasised.

She has now started a new platform called, Africans in Ukraine Education Fund (AIUEF), focusing more on education, and helping African students continue their education now that they are in neighbouring countries or back in their homeland.

Korrine’s current university has said they are closed until further notice. They then decided to do online lectures every two, three weeks, which Korinne believes is not enough for medical students.

It is now an issue that universities want to retain students, and for the students to continue paying fees without receiving the required education. “They are refusing to give transcripts in very subtle but difficult ways,” she says, making it difficult to look for other universities, because the first thing universities ask for are transcripts.

As a result, Korrine is trying to bring awareness to the needs of the students, while having conversations with educators, universities, and organisations, on how opportunities can made available for the students who were forced to flee Ukraine.

Some universities across the world are offering opportunities specifically for Ukrainian nationals.

“Now that we have left Ukraine, we do not have the same protection as Ukrainians, because we are not classified as refugees,” she told Shabaka.

This is making it difficult for African Students to access opportunities, because of legislative barriers and language, “we are classed as economic migrants,” “which is not true, I do not think education is tourism.”

Korrine, who is from the UK, born in Zimbabwe, went to study in Ukraine because the cost of education in the UK for her degree would be approximately £9,000 a year, as opposed to £3,000 a year in Ukraine.

According to research published by Ukraine’s Ministry of Education and Science in late 2020, foreign students brought $542m in revenue to Ukraine, which had a GDP of $155bn. Furthermore, students have a legal status in the country they reside in, and they should be safeguarded and have their rights protected in any country they choose to study. Clear policies and solutions should be outlined to help those put in similar situations.

Through Korrine Sky’s story, and her resilience and commitment to actively step in and help, we see evidence of the diaspora taking a leading role in crisis and humanitarian response. The contributions that the diaspora continue to offer are unparalleled, and continue to show their necessity, and impact.