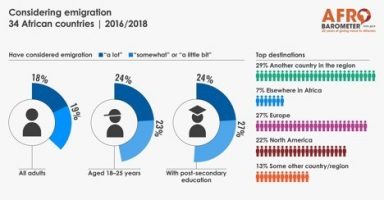 If we want to hold on to our young, dynamic and determined youth, we need to give them the right incentives to stay or risk them leaving the continent behind.

When statistics tell us that more than 40% of young Africans consider their current living situation to be very bad or fairly bad, then we are in trouble. In a survey by Afrobarometer, many of the young people who responded stated they experienced feelings of disengagement, disempowerment and discouragement, so we need to ask, ‘What hope is there for delivering on the hopes and dreams of developing a bright future for the continent’s future generations?’

Current projections from the United Nations (UN) show that Africa will be home to 4 billion people by the end of this century, and by 2035, the continent will have the world’s largest workforce—larger than that of either China or India. Yet, the inability to find stable employment and economic opportunities forces a huge number of young Africans to migrate or consider emigration, which is not surprising considering that in many cases, the populations of African countries are growing faster than their economies.

The demographic dynamics of the continents, combined with the negative narrative in the West around migrants and migration, and the myriad of economic and political challenges facing African countries puts the youth at the heart of the global migration debate. In December 2018, I joined delegates from the African diaspora and the African continent in Marrakesh, Morocco for discussions, debates and exchanges on a range of topics focused on African development and what comes next after the signing of the  Global Compact for Migration (GCM) by more than 160 countries. The GCM is an international framework developed to tackle and manage how the global unprecedented flows of migrants can be managed by the global community, which is currently estimated at 250 million, most of whom are in the Global South.

At the core of the GCM is the recognition that migration can help achieve positive development outcomes. It’s also intended to address the issues that force people to leave their homes and their countries, whether its due to climate change or conflicts, and help communities and migrants alike so that they can make the most of the opportunities created by migration. All great objectives, yet, the discussion was missing a key factor – Africa’s youth and their right to migrate for better opportunities.

In Western countries, migration is often regarded as a problem in need of a solution, often framed by media, politicians and the wider public in a negative light. Often, migrants are presented as under-qualified people taking advantage of the resources of those richer countries. But in most instances, this couldn’t be further from the truth. In a globalised world, migrants are an invaluable and sought-after resource, a truth that is often lost in the noise. Why do we rarely hear the fact that in many high-income countries, migrants constitute a considerable portion of the health-care workforce, for example? These negative attitudes are filtering to other places. For example, in South Africa, a major immigration hub in the region hosting migrants, refugees and asylum-seekers from vari­ous African countries, migration is a contentious issue. Also, it is subversion of facts because, in truth, the West only receives a small number of migrants in comparison to other countries. For example, one in six people in Lebanon are Syrian refugees; and Uganda hosts more than 1.5 million South Sudanese refugees who have the right to work and regarded as a shining example of a country welcoming refugees.

That aside, it can’t be ignored that a record number of young Africans are indeed migrating from their home countries in search of better opportunities. In 2018, it was estimated that there were 32 million African people who’d left their home countries with a vast majority doing so because of the myriad of challenges they face – home just doesn’t provide the fertile ground and access to opportunities for them to excel. When we look at these statistics, we have to keep in mind that the population of the African continent is made up of approximately 60%of people aged 25 years old and under with that projected to increase by 42% by 2030.

‘They are not apathetic or disengaged; they are simply savvy enough to know that we are not listening to them. We must not only address the dispiriting abyss of youth unemployment but ensure that young people drive the discussions that shape their lives.’ – Kofi Annan

While youthful population can have a huge positive gain for a country and its economy, the African continent suffers from several complex factors such as political instability, security risks, weak health systems, food security, climate change, poor infrastructure and more that are at the heart of driving youth migration within and outside the continent. Yet, young Africans are the game changers that the continent should be working hard to cultivate so why haven’t we been able to provide opportunities for these change makers and where are they choosing to seek opportunities?

Why and where do young Africans migrate?

Recent reports have shown that despite the perception that much of migration flows from Africa are towards Europe. There is actually strong evidence that African immigrants are more likely to move elsewhere within the continent than outside it. A 2019 Afrobarometer survey, consisting of respondents from 34 African countries, found that 36% of Africans are more likely to move to another country within the continent. And according to the African Union (AU), only 20% of African migrants who decide to emigrate from their countries actually leave the continent.

But these numbers might not tell the whole picture. We all know a friend or family member that chose a destination to migrate to partly influenced by the ability to secure a visa. The reality is choice of destination is often tempered by the reality of grueling, frustrating and highly restrictive visa requirements and the passports you carry can severely limit options. Many Africans have limited options in terms of the number of countries they can access. According to the 2018 Henley and Partners Passport Index, which ranks passports by the number of countries their holders can access without a visa, only three African countries – Seychelles, Mauritius and South Africa – are among the world’s 100 most mobile passports. Yet, there is positive news when it comes to movement within the continent, the AU is working on creating a new continental passport, which would give visa-free access to every citizen of its member states, allowing them to move freely throughout the continent.

Reasons for migration in Africa have often been linked to varies factors that have led to entrenched socio-economic problems. While the consequence is often lack of quality education and employment, these push factors that lead to so-called ‘brain-drain’, there are also pull factors, where desirability to attract brain gain to the receiving countries, especially as most migrants are young and educated. When asked for their reasons for considering emigration, those from Sudan cite a mix of pull and push factors, yet push factors were by far the most prevalent with 51% stating that their reason was poverty and economic hardship.

What role are those in the diaspora playing?

Those in the diaspora have many routes towards supporting youth on the continent, as well as those who make the choice to migrate. Those in the diaspora can offer a wealth of knowledge to those intent on migrating on navigating the systems within a destination country. They have more nuanced knowledge and experience of navigating multiple systems and if warranted, they can also share the pitfalls and challenges new arrivals might experience. The diaspora are also making a contribution towards job creation in Africa, establishing trade relations and links between companies in both countries of origin and settlement. The African Agenda 2063 includes a vision to enhance the beneficial link between the continent and the diaspora and explicitly aims to mainstream diaspora participation in the AU agenda across departments, partnership frameworks and policy activities.

African diasporas are already getting involved in strengthening linkages between host and countries of origin on the topic of migration. Diaspora members have become spokespeople for humanitarian initiatives; practiced advocacy; influenced policy-makers; developed infrastructure; and sought pathways necessary to ensure global frameworks are geared towards ensuring that migration can be as equitable, fair and safe as possible.

The current generation of African youth is dynamic, motivated and better positioned than previous generations to play an active role in achieving success for themselves and their countries. But first, we need to collectively advocate and agitate to provide them with quality education, jobs and opportunities geared towards supporting them in a globalised world. All of these are central to developing and harnessing the potential of African youth for the benefit of the continent, if we want them to stay and thrive, we, at home and in the diaspora, have to ensure we’re vocal when policies and politics fail them, and we need to mindfully and purposely ensure we are creating the physical and metaphorical space for young people to lead.