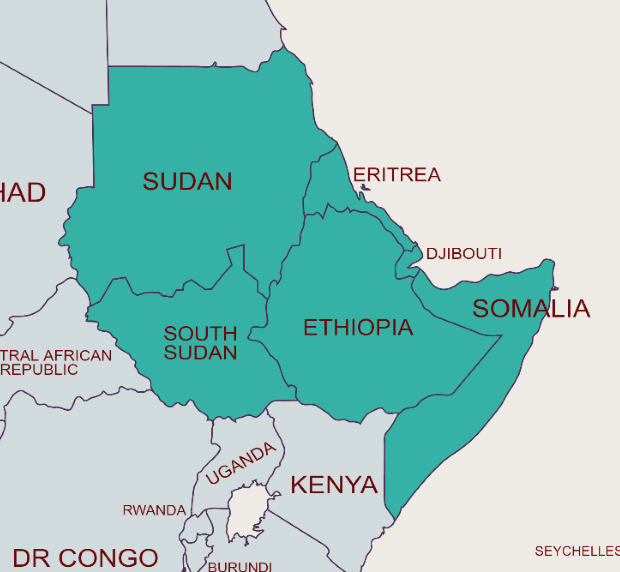 Peace from Afar: Is there a role for diaspora in peacemaking and peacebuilding in the Horn of Africa?

In recent decades, communities across the Horn of Africa region have been beset by repeated, cyclical crises, with conflict and ethnic violence exacerbated by food insecurity, natural disasters such as drought, flooding, and locust swarms, and most recently, the COVID-19 pandemic. These complex emergencies have also caused significant population displacement within and between countries in the region, as well as driving irregular migration flows to the MENA region, Europe, and Southern Africa. At the same time, there have also been some positive political changes in the region:  South Sudan’s independence, the establishment of a civilian-led transitional government in Sudan following the 2019 popular uprising, and a relatively peaceful transition of power following elections in Somaliland in 2021.

Diaspora communities around the world with connections to Ethiopia, Eritrea, Somalia, and Sudan have responded to crises in the region by contributing to preparedness, response, and recovery in affected communities. The diaspora also support peacebuilding and reconciliation efforts, especially at the local level, but some argue that as well as peace enablers, they can also be ‘peace wreckers’.  On the occasion of this year’s UN International Day of Peace, we consider the role played by the Horn of Africa diaspora in peacebuilding, reconciliation, and reconstruction.

Diaspora contributions and engagement are across economic, social and political. Remittances and investments are important forms of financial crisis solidarity, offering many in the region a lifeline. Diaspora with specialist skills have provided critical voluntary technical assistance in health, WASH, reconstruction, and education, both directly in-country and remotely using digital tools. They also use social and other media to raise awareness of emergency needs in affected areas, to mobilise money and relief supplies, and lobby for greater humanitarian efforts from the international community and settlement countries.

Diaspora activists also conduct lobbying and media advocacy for greater justice and accountability from governments in origin countries. For example, the Sudanese diaspora have called for officials from the former regime of Omar al-Bashir to be referred to the International Criminal Court (ICC) for crimes against humanity, genocide, or war crimes committed in Darfur, and have lobbied for the transitional Sudanese government to ratify the ICC’s Rome Statute.

Governments, international agencies and other stakeholders are wary of diaspora involvement in peacebuilding and reconciliation and emergency relief efforts, arguing that the diaspora can exacerbate existing tensions and differences. For example, supporting armed factions in conflict, or distributing aid to family members or along ethnic or clan lines. Governments in the region can also be wary about the potential impacts of diaspora political activism (at home and abroad,) political participation, or even of plotting coups. Indeed, such fears are not always unfounded, as the attempted 2014 coup in Gambia shows.

Certainly, diaspora can also contribute directly or indirectly to prolonging violence and instability in origin countries. In some cases, the experiences and engagements of diaspora who have fled conflicts in the Horn of Africa region are characterised by trauma- or conflict-driven behaviours, and they can perceive conflict as a legitimate response to the social injustices that forced them to leave their countries of origin .  To counter these injustices, some diaspora may support insurgents and opposition groups attempting to change authoritarian regimes .

Challenges of integration and acceptance, and racism and Islamophobia, in settlement countries, can lead some Horn of Africa diaspora to identify with, and be drawn towards, violent or extremist ideologies. Indeed, diaspora are sometimes targets for ‘grooming’ by recruiters of terrorist groups who try to take advantage of their feelings of alienation in settlement countries.

Diaspora can also help finance warring factions and ethnic militias in origin countries, whether consciously or unwittingly. Remittances can have unintended consequences, and money sent to extended family and kin can be used without diaspora’s knowledge, prolonging conflicts. The diaspora can also help armed groups engage with the international community . In addition, their activism (online and offline) can inflame ethnic tensions, as the recent conflict in Ethiopia has shown. All these activities can contribute to perpetuating social unrest and inter- or intra-state conflict.

Nevertheless, it is important not to overstate diaspora support for conflict in the region. Most diaspora responses before, during, and after crises are relatively small-scale and focussed on the local community level. Restrictions on money laundering and financing terrorism introduced over the last twenty years have made it increasingly hard for the diaspora to send money to the region, with many checks and controls required to send even relatively small amounts. Armed groups have often developed their own sophisticated financing mechanisms and are typically not reliant on diaspora support. State actors and armed factions, rather than the diaspora, are increasingly prone to using humanitarian aid as a weapon.

Although diaspora activists  can use online and digital media to incite tensions and prolong conflicts, media platforms have a responsibility to identify and remove harmful content. The diaspora are also active using online tools to raise awareness about local communities’ needs affected by conflict and human rights abuses by authoritarian governments in the region.

Diaspora investments of time, money, and skills in crisis-affected parts of the region play an important, if under-recognised, role in contributing to stabilisation and peacebuilding, stimulating local economic recovery and supporting vital health and education projects. Diaspora organisations such as Ilaysnabad and Anti-Tribalism Movement  facilitate intensive, community-based peacebuilding, social healing, and conflict resolution programmes for young people in Somalia and Ethiopia. In Sudan, organisations like Governance Programming Overseas (GPO) are working to strengthen governance and accountability in the civilian-led transitional government.

The challenge for governments in the Horn of Africa, international humanitarian agencies, and diaspora humanitarians and peacebuilders, is how best to increase the positive impacts of diaspora action in the region, while mitigating their potential for negative impact. This requires open and honest debate and coordinated action by the international community and media platforms to limit the avenues and mechanisms available for supporting conflict in the region.