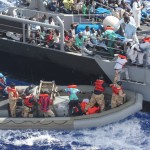 Limited opportunities, endemic conflict, political stalemate and environmental crises are compelling many people to risk it all in the search for protection and opportunities in Europe. In the absence of opportunities to travel directly to their chosen destination, more people are undertaking treacherous migratory routes in their quest for a better life.

As crises continue in Eritrea, Syria, and Afghanistan among others, more than half a million refugees and migrants have made their way across the Mediterranean to Europe in 2015. The response by European counties have largely been slow and inadequate as debates continue on how best to cope with the influx. In light of these events, a roundtable on the refugee/migrant crisis was organised by the School of Global Studies on 30 September 2015. The participants discussed what is currently happening, especially in relation to Afghanistan and Greater Horn of Africa, and the responses by the UK government and the European Union, as well as at the local level in Brighton. The event was well attended with more than 100 people highlighting how critical the issue has become. However, to come up with innovative solutions it is important to maintain the dialogue.

Recent media coverage on the mixed migration** crisis has focused on Europe’s gates with numerous images of boats filled with people beyond their capacity and those walking to and crossing through its eastern borders. However, the story is more complicated. What are these desperate people escaping and where are they escaping from?

Alongside Syria, Afghanistan and other refugees and migrant’s origin countries, the Greater Horn of Africa is a region engulfed by conflicts, humanitarian disasters and political crises leading to devastating results for many of its people. Subsequently, this has led to mass dispersal of populations across the region and beyond in their hundreds of thousands, if not millions, making it a major centre for temporary and permanent emigration (UNHCR, 2012).

Eritrea remains to be a country in perpetual readiness for war with indefinite military conscription compounded with limited employment opportunities, which has led thousands of Eritreans to flee their country every month (O’shea, 2015). Despite double digit economic growth, many Ethiopians live in abject poverty (World Bank, 2015) with conflict in the Somali region and armed opposition, coupled with refugee influx from Somalia and South Sudan. Sudan is a transit and source country, with endemic humanitarian crises induced by conflicts in the western region of Darfur and Nuba Mountains, economic crisis and political stalemate. The culmination of these crises in Sudan have led to massive population displacement to outside the country and the internal displacement of more than three million people (IDMC, 2015).

Aljzaeera- Between the desert and the fire

The youngest country in the world, South Sudan, became engulfed in conflict soon after its formation, leaving hundreds of thousands displaced internally and to neighbouring countries. With Yemen falling apart and seeing refugees fleeing, Somali’s refugees in Yemen and Yemeni’s alike are now fleeing to Somalia.

There are numerous routes that are undertaken by refugees and migrants from Eritrea, Ethiopia, Somalia and Sudan, including across the Egyptian Sinai desert to Israel; Saudi Arabia by crossing the Red Sea to Yemen; South Africa through Kenya; and Europe through Libya and crossing the Mediterranean (RMMS, 2014).

The East-North Africa route is the main route for many; a treacherous route from Eritrea and Ethiopia, through Khartoum and across the desert to Libya (Ahmed, et al. 2015 [forthcoming]). With Yemen being engulfed in conflict, Egypt’s on-going security operations in Sinai, and with almost no border controls along its border, Libya became an important route to those seeking to reach Europe’s shores.

Many of those who undertake the journey know the risks. With access to the internet and telephone communications, they have up to date knowledge of the horror stories along the migratory route. But with no hope of obtaining visas for direct journeys to their chosen destination, they have no choice but to risk it all for the opportunity to live a dignified life.

These broad socio-economic and political overviews do not reflect the thousands of untold stories of the people who undertake these dangerous journeys, but rather a snippet of the broader realities they are facing.

The mixed migration crisis is not likely to end anytime soon; the conflicts are still ongoing and people will continue to leave. Even if Europe increases funding to refugee and migrant’s countries of origin, this will not be enough, unless of course, it deals with the issues and challenges not only in countries of origin but also transit countries (Collyer et al, 2015).

** Mixed migration is a complex population movements including refugees, asylum seekers, economic migrants and other migrants who are travelling in an irregular manner along similar routes, using similar means of travel (International Organization for Migration and United Nations High Commissioner for Refugees).

O’shea, S. (24 April 2015). Mediterranean migrant crisis: why is no one talking about Eritrea? The Guardian, London. http://www.theguardian.com/commentisfree/2015/apr/24/mediterranean-migrant-crisis-eritrea-western-allies (accessed 5 October 2015).