Distressed persons are transferred to a Maltese patrol vessel. 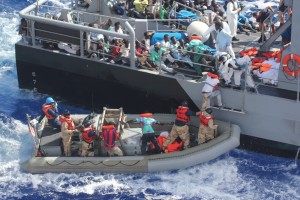