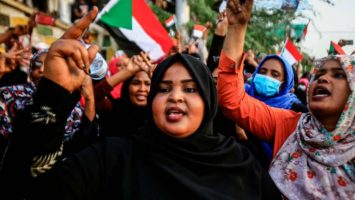 Sudan’s revolution risks being stolen from under our noses

On 11 April there were jubilant scenes on the streets across Sudan when Omar al-Bashir was ousted after almost three decades in power.
When the protests started last December, an unprecedented number of Sudanese took part or supported the peaceful protests, including solidarity protests by the diaspora, in London, Cairo, Washington, DC to name a few.

The protests showed the many facets of Sudanese creativity, generosity, humour and most importantly, the tenacity and courage that had enabled them to endure the Islamist government and their policies thorough 30 years of undemocratic rule.

Long-time leader Bashir was ousted and replaced by a military-led transitional council, headed by Awad Ibn Auf, the Minister of Defence.

But this did not quell the protests, and within 24 hours, Ibn Auf resigned and was replaced by Abdel-Fattah al-Burhan, general inspector of the armed forces. The transitional council has promised dialogue with the opposition and to hand over power to a civilian government within two years.

However, a very unique revolution is in danger of being stolen from under people’s noses. Many people were quick to realise that the current transitional council is looking to continue business as usual. The state of emergency declared by Bashir remains in place and no sight of a civilian government is emerging.

The sit-in outside the military headquarters continues, and all eyes are now on how the transitional council deals with those determined to maintain the sit-in until their demands are met.

One particularly troubling issue in the new government is the rise of the Rapid Response Forces (RSF) Lt. Gen. Mohamed Hamdan (aka Hemeti), who is now the second in command of the newly established transitional military council.

The RSF, formally known as the Janjaweed, have been responsible for serious human rights violations in the Darfur, including the use of rape as a weapon of war with more than 300,000 people killed and over two million displaced from their homes.

In haste and jostling for some power, most of the opposition appears to have embarked on a compromise strategy in its dialogue with the transitional council, indicating they have perhaps grown used to lowering the bar when it comes to how Sudan should be governed, and thereby jeopardising the very essence of the revolution.

In part, their reaction is a symptom of the years of the systematic destruction of any political opposition in Sudan, as well as the civil society spaces. However these efforts failed to placate those who have protested over the last couple of months, and the sit-in at the military headquarters continues.

This is the time to be bold, and to address Sudan’s numerous challenges, including reforming the economy, and rebuilding the state’s infrastructure including health, education and justice sectors, especially for the peripheries in Darfur, Nuba Mountains and Blue Niles which have endured years of conflict.

Why is protest on this scale happening now in Sudan?

With a history of revolutions against dictatorship in Sudan, in 1964 and 1985, it was not a question of if, but when protesters would come out against the government.

December 2018 was the perfect storm – Sudan’s economy was in free fall, with every household affected by the spiralling cost of living. The protests began in the periphery, starting in El-Damazin on 13 December, quickly spreading to other towns and cities across the country, with a critical demonstration in Atbara, Nile State, on 19 December.

Government forces were not able to quell the protests as quickly if they had started in Khartoum. Additionally, the leadership of an unaffiliated non-ideological body was critical in galvanising the masses, notably the Sudanese Professionals Association (SPA), an umbrella organisation of doctors, lawyers, journalist, teachers and other professional groups.

Despite continued references to “the second Arab Spring” – and there are numerous similarities – these comparisons deny the country its multiple identities.

Sudan lies across unique cultural, linguistic, religious and ethnic fault lines, which cross both Africa and the Arab world. This was not a second Arab Spring, rather a unique Sudanese revolution.

The role of women and youth in the protests

The protests were driven by young people – those born or raised under Bashir’s almost 30-year rule. Women, young Sudanese women, in particular, have played a crucial role in the protests at all levels, and have been labelled “kandakat”, the title for queens of ancient Nubia.

Despite restrictive rules to govern dress and behaviour which predominantly affected poor communities, Sudanese girls and women showed their strength and tenacity during the protests.

This should come as no surprise; Sudanese women have played significant social and political roles throughout Sudan’s modern history, but it will be essential that they also form part of the political dialogue and future government.

What can the wider world do for the Sudanese people?

There was a deafening silence by governments and international media when the protests began, and the coverage of events only came to the fore when Bashir was ousted.

But Sudan is the midst of competing interests and powers, providing the foot soldiers for the Yemen conflict, for example. Its allies, Saudi Arabia, United Arab Emirates and Egypt, all came out to support the transitional council (al-Burhan is the General overseeing Sudanese forces in Yemen), while the European Union talks about democracy, but is blinded with its drive to stem migration to its shores.

The African Union was one of the few voices that rejected the military-led transitional council, urging the installation of a civilian-led government.

A lot is a play at the moment, and in truth, no one knows where Sudan will go in the coming days and weeks, as negotiations and deal-making take place behind closed doors.

While the Sudanese people now face many challenges, the hope is that their aspirations for a better life can be realised.