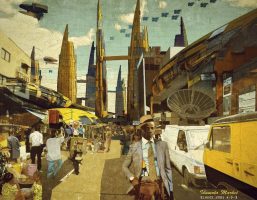 Taking Charge of Cultural Diplomacy – One Tweet at a Time

Samah Ahmed, Programmes and Research Manager at Shabaka, writes about how cultural diplomacy, in particular through digital platforms in 500 Words Magazine.

Taking Charge of Cultural Diplomacy – One Tweet at a Time

Representation of Africa and Africans in the Western media, has been, for decades, a consistent parading of malnourished and naked African children in front of cameras and images of lions and gorillas in the jungle. When we see this, we ask ourselves, ‘Where do they get these images from?’ Those who know and love Africa and their own Africanness, are doing something transformational online; they’re harnessing the power of the internet and their collective voice, talent and knowledge, to engage in digital cultural diplomacy and tell the world: There.Is.More.To.Us. 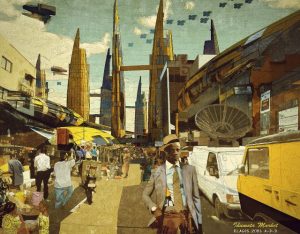 For weeks, before and after the release of the film, Black Panther, seemed to be the only thing people talked about. The hype around the film had been building since it was first announced, and when it finally made it on to the big screen, the film made waves for its obvious messages of empowerment, but also the subtext of Sankaran philosophies and Pan-Africanist ideas. However, one of the key takeaways from the film, along with its entertainment factor, is that it was also an important tool to promote and acknowledge the different facets of being African, and an acceptance of blackness. The movie was an example of cultural diplomacy.

The larger narrative of African countries has, for generations, been reduced to stereotypical ones of catastrophe and of a place in need, largely due to colonial and slavery legacies. But, on the edges of that main narrative, young diaspora with roots in the African continent are vocalising and challenging this narrative, presenting the African continent as a complex place that is full of problems, but also diversity in cultures, full of innovation, dreams and talent.

Cultural diplomacy is not an entirely new concept. Formal diplomacy is understood as a cornerstone of modern politics, i.e. negotiating peace agreements, being part of diplomatic missions etc. Whilst cultural diplomacy has existed as a practice for centuries, without necessarily being recognised as such. In fact, while the term ‘cultural diplomacy’ has only recently been established in the diplomatic lexicon, evidence of its practice can be seen throughout history. For example, explorers, travellers, traders, teachers and artists can all be considered living examples of ‘informal ambassadors’ or early ‘cultural diplomats’.

An increasingly globalised world, an uptick in migration flows, with the rapid proliferation of technology, expansion of online social spaces, and the rise of citizen journalism means that now an individual or group is interacting with different cultures. Look at the field of sports, for example, where global events such as the World Cup and the Olympics bring together sports people from 79 and 206 countries, respectively. Or the field of art/filmmaking where films like Black Panthernot only spawned hundreds of think-pieces but also generated a record-breaking 35 million tweets and still counting, around black cultural identity and pride, as well as the ongoing need to undo the brutal damage done by colonial powers to black and brown people across the globe.

Cultural diplomacy, when harnessed by individuals, offers a fascinating way to generate recognition of cultural diversity and heritage, global dialogue between cultures, equality and disruption of power dynamics that favour state over the individual.Through Web 2.0 technologies such as websites, blogs and social media networking tools, every individual is presented with the opportunity to share information with the world. People no longer need the state, official diplomats, and politicians, capital or the ownership of mass media companies to share their ideas and knowledge or to shape their identity.

In today’s global village, with an ever-increasing mobility of people across borders, migrant and diaspora communities are bringing a wealth of homeland culture expression to far-flung communities. You can observe this In the UK, where Chatterbox is offering language courses taught by refugee tutors, the Caribbean diaspora has set-up festivals, such as the annual Notting Hill Carnival, and Sudanese artists’ such as Ibrahim El-Salahi is having a two months showcase at Britain’s Tate Modern.

“I don’t want to be one of those artists who make African music only outside of Africa. Just because I’m an immigrant and I live in the diaspora does not mean I am not an extension of the arm”.

A growing group of second-generation diaspora (usually meaning children who are born in a host country to immigrant parents), which is where most aspects of daily cultural diplomacy takes place, have used online spaces to amplify their messages and identity, focusing on youth in Sudan. For example, the #SudaneseExcellence hashtag has been used thousands of times on Twitter, Facebook and Instagram to not just highlight, but to illuminate the achievements of those with Sudanese origins. Promoting Sudanese success and achievements to a global audience is a form of power disruption that snatches power to set the narrative from the state and legacy media. It is also a powerful tool to reaffirm self-identity and pride.

Anyone who has used Twitter and Facebook in the last few years will see numerous examples of individuals reinforcing their Sudanese (and Pan-African) identities. There are digital spaces for a variety of purposes, connecting people with their country of origin, highlighting and amplifying achievement of marginalised groups such as women and girls, encouraging tourism, promoting ‘positive’ cultural traditions, organising and campaigning transnationally, creating and reflecting solidarities and sharing cultural heritages.

“A lot of things are said about people like me – young people, black people, Muslim people, women…The reason I perform is to answer those things, to be a voice I didn’t really have growing up”.

The cultural dimension of diplomacy, when driven by individuals in the public sphere, attempts to merge various differences and cultivate an appreciation of these differences between people and in some cases, states that has arguably bypassed the fatigue and discomfort some have with traditional advocacy roles and overt diplomatic objectives. While traditionally, elders, especially grandparents, were the tellers of stories of the ‘good old days’ where freedom of expression and social freedom were the norm, there is  now a new generation of digital storytellers. These are people whose experience of a world in ﬂux, is driving their desire to occupy the middle ground of cultural diplomacy that attempts to balance between overstated traditional media rhetoric about the African continent and on-the-ground reality of a continent full of vibrancy, innovation and potential.

Yet, there are some unanswered questions that need to be better understood before digital cultural diplomacy can be harnessed by those in the African continent and diaspora, to dismantle the deeply ingrained caricaturing and ignorance about Africa and those of African descent, that continues in Western, Arab and other media. Is there a diversity of voices that can help represent a holistic, heterogeneous and multi-faceted understanding to the fact that successes are everywhere? Are we willing to see them? After all, while, as individuals, we are well aware that not everything is as we want it to be right now, focusing on only the negatives is telling half the story, and as the saying goes; half-truth, is half-lie.