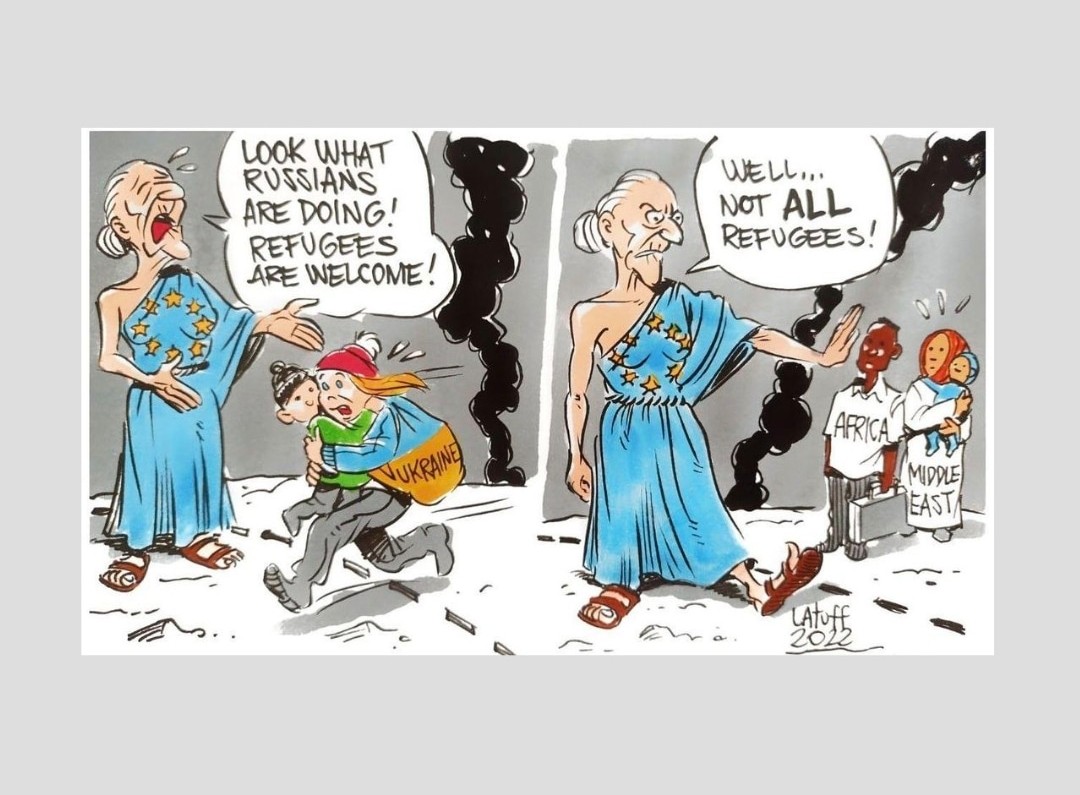 It has now been two months since the war in Ukraine erupted with Russia’s military invasion and occupation. The sum-total of displaced people, and the ever-growing flow of refugees from Ukraine will have repercussions for generations to come. The number of those escaping the war-torn country is now so great, that it represents the biggest wave of migration within Europe since WWII.

Thus far, Russia’s war in Ukraine has revealed many things, particularly the willingness of governments and political leaders to swiftly put adequate policies and resources in place to assist Ukrainian refugees. This is not to say the response to this crisis has been perfect, on the contrary, there is plenty of room for improvement.

However, the efficient and unified response to the plight of Ukrainian refugees stands in stark contrast to anything we have yet seen this century, particularly when compared with the response to the refugee crisis of 2015, and to asylum seekers in general.

It has become even more evident that the difference in the treatment of Ukrainian refugees versus that of refugees who are people of colour (PoC), is not solely due to bad leadership or questionable law enactment, but in fact what many of us already knew – is largely due to racism.

There has been an outpouring of public sympathy and political support for the refugees from Ukraine. Political leaders have continually made clear that Ukrainian refugees are welcome.

Mainstream media outlets and journalists have peddled the narrative that these are ‘civilised’ people, with ‘blonde hair, blue eyes’ and deserve to be protected. CBS News correspondent Charlie D’Agata said, “This isn’t a place, with all due respect, like Iraq or Afghanistan, that has seen conflict raging for decades. This is a relatively civilised, relatively European city, one where you wouldn’t expect that or hope that it’s going to happen.” Aljazeera anchor, Peter Dobbie also commented, “looking at how they’re dressed – these are prosperous middle-class people, these are not obvious refugees trying to get away from areas in the Middle East – or areas in North Africa –they look like any European Family that you would live next door to.” Kelly Cobiella, NBC news correspondent unreservedly remarked, “these are Christians, they’re white.”

On the borders of Europe, we have seen Ukrainian refugees met with food, water, clothes, and toys for children, by armies of volunteers. We have witnessed accommodation and refugee centres cleared out to accommodate them, with citizens across Europe offering to host Ukrainian refugees in their own homes.

Countries like Poland and Slovakia have allowed Ukrainians to enter without passports, or valid travel documents. Ireland announced the immediate lifting of visa requirements, and Ukrainian refugees can travel visa-free to 90 world countries. Greece for example, launched a special job search page with company ads specifically for Ukrainian citizens. Furthermore, countries across the globe have pledged large sums of money to donate in humanitarian aid and support. These are landmark and unprecedented moves.

Perhaps most notably, on March 4, the EU reactivated the Temporary Protection Directive (TPD), which offers Ukrainian refugees immediate protection and a clear legal status for three years in EU member states. Without the need to apply for asylum, TPD gives Ukrainian refugees access to a residence permit, education, housing, healthcare, and the labour market.

This is in stark contrast to the treatment of refugees arriving to Europe in 2014-15, forced to face the long and drawn-out and uncertain process of applying for asylum, with many being confined to detention camps, rife with allegations of abuse, and were unable to access basic legal provisions within them.

Donald Tusk, then President of the European Council, argued that in line with the EU directives, all refugees arriving should be detained for 18 months while their claims were being processed. Several years later, many Syrian refugees remain in detention centres and refugee camps to this day.

Each EU member state will apply TPD’s standards based on their own national immigration systems and legislation, reflecting the continued tensions and inconsistencies between migration policies at the EU and Member State levels.

TPD however, does not include Norway, Lichtenstein, Switzerland, Iceland, and Denmark. Denmark has, however, introduced a new special law, which is similar to TPD. This is at all not ironic, with Denmark being known for revoking residence status for more than 200 Syrian refugees and threatening to deport many more back to Syria, in the premise that Syria is safe now.

Pre-War: Where the immigration system was headed

Many European countries, including the UK, have been widely criticized for their immigration policies, as anti-immigration rhetoric has become increasingly prominent and more popular. Poland’s political party Law and Justice (PiS), insists the reason they were elected was due to their promise of keeping “immigrants, and Muslims out.”

UK Home Secretary Priti Patel, has peddled the idea of the UK Coast Guard and Navy turning boats in the English Channel, headed for Britain, back towards France. The English Channel is one of the busiest shipping lanes in the world, fraught with danger. Those making the crossing from France to the shores of Kent are often from war ravaged countries, traveling in cheap inflatable and unseaworthy dinghies.

Countries like Hungary, Croatia, and Poland have militarized their borders to stop refugees from entering. The European Commission has given EU states millions of euros to intercept so called “irregular migrants.” Not to mention, the infamous €6 billion deal the European Union struck with Turkey in March 2016, to return refugees to Turkey, with Turkey being the largest refugee-hosting country in the world.

The UK also recently ‘donated’ £55M to France in 2021, to try and prevent border crossings. Additionally, the annual budget for Frontex, the body responsible for protecting the external borders of the European Union, increased to €543M in 2021, from €460M 2020.

Instead of money being allocated for funding refugee charities and organizations, and helping the most vulnerable, resources are being used to prevent refugees and immigrants from crossing borders, and oftentimes with impunity and illegal measures.

With many EU countries investing in tough surveillance and interception regimes, there are countless stories circulating of asylum seekers trying to enter the EU only to be pushed back to the border of other non-EU states like Serbia, Bosnia, or Belarus, by overly aggressive border patrols, accused of physically attacking migrants, accompanied by allegations of sexual abuse, stealing money, and destroying belongings.

Oftentimes border guards are racist, aggressive, and have no regard for human safety – especially to PoC.

Countries are also fortifying more border infrastructure, including building wired fences and impenetrable barriers between borders. Warsaw announced in January 2022, that it had started building a £293m, 186-kilometer wall along its border with Belarus to keep Middle Eastern, African, and Asian asylum seekers from entering the country. Immigrants are left stranded in freezing forests, with no shelter, food, water, blankets, or medicines, with at least 19 migrants reported to have died due to winter temperatures.

Even before the political ping-pong match between Poland and Belarus, few refugees were welcomed in Poland, which granted asylum to 161 applicants out of 2,803 in 2020. On the other hand, Poland, having received the largest number of Ukrainian refugees, has proudly responded with open arms saying, “these people are like us.” Although contrary to the government’s PR efforts, the welcoming response in Poland is mainly due to the efforts of volunteers and civil society groups.

This situation is also mirrored in the US, where President Biden has offered to grant asylum to 100,000 Ukrainian refugees, while at the same time just a few months ago, over 20,000 Haitians were deported from mainland US within a matter of days.

Not only has the legality of the deportation of Haitians been thrown into question and the controversial use of Title 42, but millions around the world viewed the images of border force agents chasing Haitians on horseback whilst using whips to be morally repugnant. Perhaps those images accurately illustrate what immigration policies look like for PoC.

Similarly, since the takeover of Taliban in May 2021, there was another wave of Afghan refugees fleeing Afghanistan and in need of a new home, and again, in that instance, we saw a European and US response that failed to match the rhetoric of support for the Afghan people.

Another disturbing trend has been the approach of some states to outsource processing of asylum applications to third countries. Australia has gained notoriety for its policy of offshoring asylum-seekers to neighbouring countries in various iterations from 2001, a system which the UN has repeatedly criticised on human rights grounds. The EU opened border posts in Niger in 2016 to process asylum claims before people undertake dangerous and uncertain journeys across the Sahara.

Similarly, Denmark and the UK have signed agreements on off-shore processing of asylum-claims with Rwanda. In all these cases, the rationale used is one of protecting migrants and deterring people smugglers. Yet these approaches face ongoing legal challenges, and have rightly been criticised for their failure to take responsibility for obligations to protect asylum-seekers.

There have always been clear deficiencies and weaknesses in the Common European Asylum System (CEAS). As noted above, this was evident during the refugee crisis of 2014-2015 when the European Union failed to address the refugee crisis unfolding and respond appropriately. Instead, what we saw was arguments about which member states should accept which refugees, a refusal in many cases to host refugees, and a negligence that led to backlogs, long waiting times, and inconsistency.

What we see in 2022, is a willingness in the Global North to help, and a tendency to prioritise ‘white’ or European refugees ahead of refugees from other countries. Black and brown refugees are simply viewed as second-class citizens who are expected to endure unbearable conditions that are viewed as normal.

The blatant double standards in the handling of Africans, Asians, and Middle Easterns attempting to flee Ukraine underscores the urgency to reform policy on refugees and migrants, and offer equitable access to safe, legal routes, and protective legal status, for all displaced people, wherever they are from.

The current response to Ukrainian refugees by the EU should serve as a valuable model for states to fix their toxic relationship with refugee arrivals, and to encourage reforming asylum immigration systems worldwide. Applied more widely, this approach could be ‘the rising tide that lifts all boats’ for how we strengthen migration governance at a time when ever more people are being displaced by crises.

TPD offers an unprecedented solution and lifeline that must be extended to other nationals and refugees. The welcoming rhetoric, support, and funding, needs to be offered across the board, with no discrimination. Those fighting for refugee and asylum rights now have clear examples to build on and demand the same equal rights for all refugees under international law and the 1951 Refugee Convention – and nor should they settle for anything less.