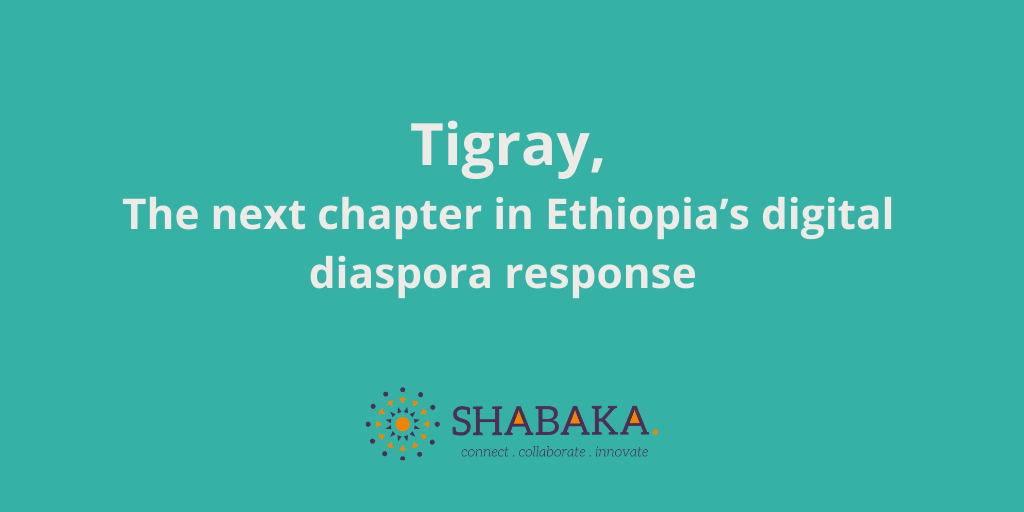 Tigray, the next chapter in Ethiopia’s digital diaspora response

The Ethiopian diaspora has been a critical actor on the economic, social, and political front in Ethiopia for decades. This has intensified in recent years as the Ethiopian diaspora has increasingly become a digital one, leveraging technology to engage economically, socially, and politically in Ethiopia. This can be seen in the recent humanitarian emergency in the country’s Tigray region.

The Ethiopian diaspora are estimated to be between 1.2 and 3 million, and are based mainly in the United States, Gulf states, and Israel (EuDiF 2019 ). Their engagement and impact on domestic politics, as well as their social and economic impact, has been well documented.

Combined remittances to  Ethiopia from the diaspora are believed to account for about five percent of the country’s GDP, although remittances have declined in recent years. The launch of the Ethiopian Trust Fund is an indication of how seriously the Ethiopian government and its international partners value diaspora contributions to the country.

Social media, news channels, and group chats on messaging apps provide a constant stream of information and updates on the situation back home.  These same platforms are used to raise awareness about events in the country, and to mobilise resources, skills, and time, including fundraising activities organised by the diaspora in response to the recent crisis in Ethiopia’s Tigray region.

Tensions between the federal government and the ruling party in Tigray region, the Tigrayan People’s Liberation Front (TPLF) led to a military clash after a provocation by the TPLF military in November 2020. Hundreds of thousands of local people (and Eritrean refugees in the region) fled the conflict between the Ethiopian army and local TPLF fighters, forced to leave their belongings behind in search of safety.

More than 60,000 Ethiopian people have crossed the border into Sudan since November 2020, while close to a million people are believed to be internally displaced.  Providing humanitarian assistance has proved difficult, as the federal government only allowed aid supplies into the Tigray region from early December 2020.

Humanitarian needs were already high in several parts of the country, including in the Tigray region, before the recent conflict and instability. Millions faced food insecurity, were affected by Covid-19, plus a major locust outbreak destroyed crops in places where the majority of people are smallholder farmers. The northern part of Ethiopia also hosts close to 96,000 refugees from Eritrea.

Diaspora support in time of need

The Ethiopia diaspora have actively engaged on all fronts to respond to this recent crisis. In responding to needs on the ground, Ethiopian diasporas across the globe sent support to those affected by the military operations, mobilising money, supplies, and skills.

A one-day fundraiser organized by US based diaspora in an online event raised over $21,000 US dollars. As the fundraiser was organized in cooperation with the Ethiopian Ministry of Peace, the funds collected  are allocated to initiatives that ‘support efforts to rehabilitate communities affected by the law enforcement operation’.

The Ethiopian diaspora in Europe and North America  mobilised money, clothing, and other relief supplies for Ethiopians displaced to Sudan via messaging apps and social media. Sudan is where most of the Tigray refugees fled to in the past two months and the call for support was mostly shared with and by Ethiopians who have a link to the Tigray region.

Digital Advocacy in a divided diaspora

Use of technology has been critical for the diaspora and for their families back home. Communication channels in Tigray region were disconnected or barely working from November and only partially restored in mid-December. This has made it hard for diaspora communities to stay in touch with loved ones and for media to fact-check reports coming out of the conflict region.

The diaspora has also been active in media advocacy, helping raise awareness of humanitarian needs on the ground as part of mobilisation efforts. However, updates and developments about the crisis in Tigray shared online and in messaging apps are bitterly disputed by those who have taken a political stand when it comes to the current crisis. The disputes range from different political alliances to misinterpretation and spreading misinformation.

The many arguments and debates witnessed in the Ethiopian diaspora community, mainly online, have led to another type of diaspora intervention: efforts to educate and inform, and encourage dialogue. For example, a recent private webinar organized by the Ethiopian diaspora in Europe aimed to promote engagement and dialogue between |Ethiopians of different backgrounds and political affiliations. One of the organizers explained that ‘before we can contribute to the development of Ethiopia in any meaningful way, we need to be united first’.

More recently, a diaspora crowd-funding campaign raised $5m USD in the spring of 2020 to provide vital medical and protective equipment to support Ethiopian medical workers in the fight against Covid-19.

The Ethiopian diaspora’s humanitarianism has a long pedigree, but their enthusiastic adoption of technology has enabled them to increase the impact of their initiatives, even at a distance. For example, Ethiopian diaspora data specialists and doctors mobilised to help Ethiopia’s health ministry by contributing open-source software to respond to COVID-19, establishing the Ethiopia COVID-19 Response Team.