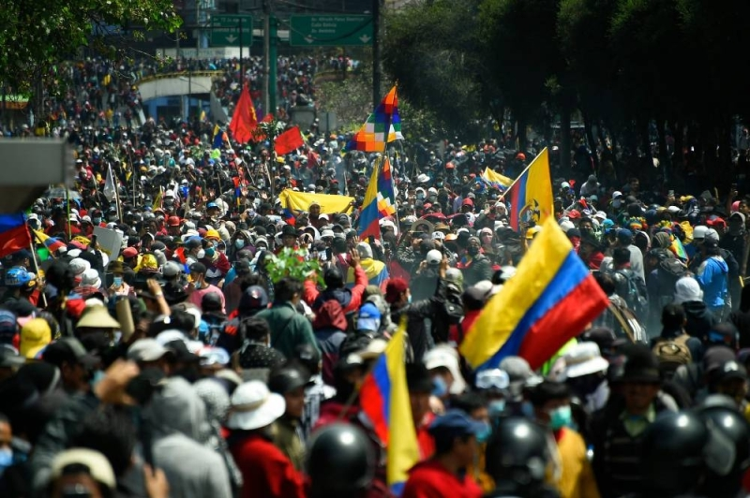 We have been here before, and we shall be here again.

The protests declared on 13 June 2022 were no surprise to any Ecuadorian in Ecuador or in the diaspora.  Ecuador’s long history of structural inequality, reliance on oil, and continued political instability, amongst other factors, has left many with no option but to protest the current government’s policies.  These factors, coupled with the more recent global shocks that include the ongoing reverberations of the war in Ukraine, the COVID19 Pandemic, and drug-linked violence, have resulted in unusual volatility in the Ecuadorian economy (Guardian, 2022).  The economy relies on 47% of total exports in 2019, mainly bananas, cocoa, coffee, fish and shrimp, and oil (about 36% of total exports); thus, 86% of the economy is susceptible to global economic factors.  The Ecuadorian diaspora remits $3.4 billion, which accounts for 3.4% of GDP (World Bank, 2022).

Of the last six Ecuadorian presidents, only three have finished their presidential term in office during the previous 30 years.  All six presidents faced coups d’état, economic crises, civil unrest, and corruption scandals.  It is, however, the decade of the 90’s that many Ecuadorians in the diaspora look back on in despair, as the country imploded with an estimated 500,000 to 1 million emigrating to North America and Europe.  The decade brought the severe El Niño Weather phenomenon, resulting in drought and crop failure which affected the agrarian economy, the Cenepa war with Peru in 1995, financial mismanagement by the banks and government resulting in macro-level loan defaults, and finally, the 1998 oil price crash (Jokisch, 2014).  The Diaspora organization Federación de Ecuatorianos en el Exterior (Federation of Ecuadorians Abroad) lobbied successive governments between 1998 and 2006 to change electoral law to allow for overseas voting.  In 2006 this was successful, and the Correa government strengthened the law in 2008, increased representation for overseas voting (de Reguero & Dandoy, 2020), and passed the progressive Human Mobility Law in 2017 (Echeverria, 2017).  This has largely kept the diaspora engaged in socio-political processes back home.

The Confederation of Indigenous Nationalities of Ecuador (CONAIE), which came to prominence in the late 1990s, was able to influence Ecuadorian politics over the course of 40 years.  They acted as a catalyst and power brokers for wider anti-government protests, which saw alliances with national trade unions and social movements.  The successful nationwide protests often included blockading major cities,  roads and presenting a list of socio-economic demands (Jameson, 2011).  This has proved a successful method of protest but has garnered less public support and increasingly severe response from the military over the years.

The military has traditionally been seen as a vanguard in Ecuadorian political affairs, which will allow peaceful protest and step in to create a space for negotiation when necessary (COHA, 2010).  In the last few years, the military and the police have had a much heavier approach (Amnesty International, 2022), perhaps due to the heightened security situation in  three provinces due to drug violence and  due to Indigenous protests, which has led to a state of emergency being declared (Aljazeera, 2022a and France24, 2022).

During the recent protests,  other traditional allies such as the trade unions and social movements declared they would join some of the strikes but distanced themselves from CONAIE.  The national support from the general public was sympathetic.  Still, many were concerned about the harm to the economy since many had suffered economic loss during the Pandemic and couldn’t financially afford not to work for weeks (France24, 2022b).

CONAIE and its allies have also, over the last 40 years, grown increasingly suspicious of its traditional allies.  The trade unions, social movements, military, and politicians who support them have often sidelined CONAIE once broader political aims have been achieved (Novaramedia, 2021).  It should be noted, though, that the  Afro-Ecuadorian population, is seldom included and purposefully marginalized in  political dialogues, even though they account for an estimated 7% of the population (Sánchez, 2008) .

As it stands, CONAIE and the government have come to a negotiated agreement, with a 90-day implementation period before the indigenous movement return to the streets to protest.  The government has an increasingly difficult task, with a confidence vote already being taken (which they won) and four significant ministerial resignations (Aljazeera, 2022b).  Those in Ecuador and the Ecuadorian diaspora are resigned that there might be more nationwide protests down the road, with President Lasso’s position looking increasingly vulnerable.

In conclusion, Ecuador will face further socio-political and socio-economic unrest without wholescale economic restructuring and poverty alleviation programming.  For the Ecuadorian diaspora, it is again yet another chapter in our democratic history where we are watching Tele Amazonas (Ecuadorian TV Channel) on YouTube and scrolling through El Comercio (Ecuadorian Newspaper). We do this while cross-checking information with Ecuadorian diaspora Facebook groups, Twitter analysis, and WhatsApp-ing family and friends back home. We have been here before, and we shall be here again.