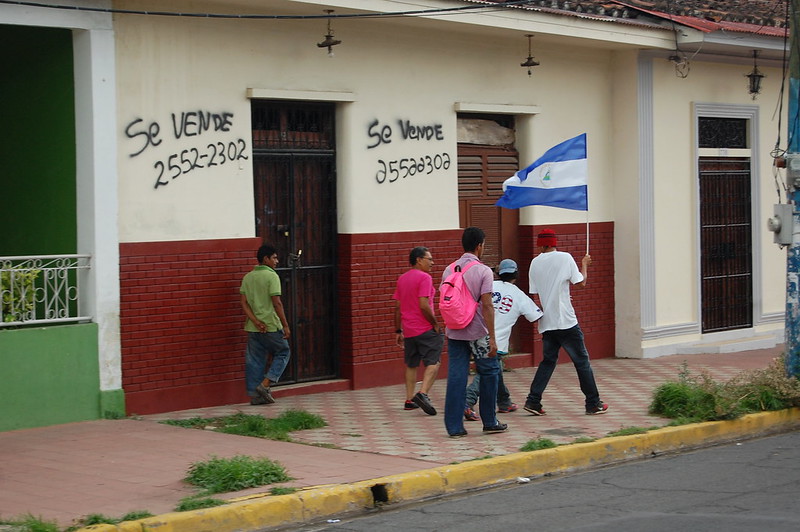 When the walls are closing in

The Nicaraguan political crisis began on the 18th of April 2018 when the government announced controversial pension and social security reforms. The protests were initially only confronting the government on this issue, but this soon developed into a broader protest against the Nicaraguan Government.

The resulting government crackdown, police violence, political repression and human rights violations have led to more than 100,000 people flee Nicaragua since 2018. As of August 2020, there was an estimated 81,000 Nicaraguan refugees in Costa, with other principal destinations being the USA, El Salvador, Honduras, Guatemala and Spain. This follows migratory destinations previous generations of Nicaraguans have fled to during the Sandinista Revolution and Contra War.

The political crisis has deepened with the economy contracting by -5.9% in 2020, Hurricane Eta and Iota devastating parts of the country and the ongoing response to the Covid-19 Pandemic.

The last 3 years since April 2018, have seen current and previous waves of the Nicaraguan Diaspora galvanised to participate in humanitarian action.  In Shabaka’s recent (2021) research for the EU Global Diaspora Facility, all Nicaraguan participants interviewed identified the political crisis of 2018 as a catalyst for their increased involvement in humanitarian action. This has come at a huge personal cost to many as they have been deemed “persona non grata” by the government which has actively legislated against diaspora organisations and individuals.

Since the 2018 political crisis, the government crackdown has also extended to the diaspora, who were targeted specifically by two new laws. On the 15th of October 2020 The Law for the Regulation of Foreign Agents was enacted and on the 27th of October, 2020, another law The Special Law on Cybercrimes was enacted by the Nicaraguan government. The Law for the Regulation of Foreign Agents requires Nicaraguans working for “governments, companies, foundations or foreign organizations” to register as foreign agents with the country’s Interior Ministry. There are now stringent reporting requirements on foreign funds which need to be submitted to the Interior Ministry. The new law has placed restrictions on remittances according to Nicaraguan Diaspora groups.

The Special Law on Cybercrimes has been brought in to combat what the Nicaraguan Government describes as “use [of] online platforms to spread false information or information that could raise alarm among people.”  Many in Nicaraguan Diaspora groups believe that this law will be used to target dissidents or families of dissidents.

This has drastically changed the dynamics in which the Nicaraguan diaspora is now able to operate. The reaction of the diaspora has been mixed, with some ceasing operations temporarily while others reconfigured their entire operational delivery system. As the diaspora is not homogenous and there are complex political groupings within it, the new laws have served only to fracture it further.

In February 2021 the Nicaraguan Political Crisis of 2018 has continued unabated with the situation according to Amnesty International getting precariously worse. Their recent report “Silence at any cost. State tactics to deepen the repression in Nicaragua” has documented the increasingly worse human rights repression and crisis in the country with no end in sight.

The walls have gradually been closing in on the Nicaraguan diaspora’s humanitarian aid operations since the start of the political crisis, it remains to be seen how much further the Nicaraguan government is willing to go. The situation is increasingly volatile due to additional factors such as the devastation left by the hurricane and the economy contracting and will be tense for some time yet.  As evidenced in the Shabaka report, the Nicaraguan Diaspora are resourceful and will inevitably find a way to deliver humanitarian aid to those in need even though access is limited.