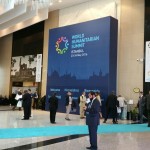 World Humanitarian Summit- what will it achieve?

Conflicts, natural disasters and epidemics are leaving people in desperate situations and it is happening more than ever before. Getting life-saving aid to these vulnerable people is also becoming increasingly complex, with conflicts becoming protracted and disasters affecting more densely populated urban areas.

The World humanitarian summit (WHS), taking place in Istanbul this week (23-24 May), is bringing together UN, government, civil society, representatives of affected communities and private sector organisation to see how to better deliver assistance and protection to the unprecedented number of people affected by crises. The initiative is the first of its kind and was proposed by UN secretary general Ban Ki-moon in January 2012 in the hope it could revolutionarise how aid is provided, or at the very least result in concrete agreements for improved assistance.

This has meant many in the aid sector have been busy placing their bets on the outcome, agreeing commitments from their respective organisations and haggling for hotel rooms and roundtable slots- Shabaka included.

The WHS could be an opportunity for us as diaspora to participate in and join the quest for a more relevant and efficient humanitarian system, inclusive to all actors. It could also provide a platform on the world stage to expel any confusion about who we are, our interests and added value through our skills and knowledge.

Diasporas are individuals and communities who live outside their home countries, but remain connected and invested to make things better. With these close links, we can be agile in our response and use our links to target for the greatest impact, both during a crisis and long after the international agencies have left.

However, some are saying the WHS has failed in its goals before participants have even landed in Turkey. Leading aid agency Medicine San Frontiers pulled out of the summit earlier this month due to lost hope that “the WHS will address the weaknesses in humanitarian action and emergency response”. They were particularly underscored the impact it could have on conflict crises that witnessed an unacceptable number of international humanitarian law and refugee rights violations. 75 hospitals hospitals managed or supported by MSF were bombed last year alone. To further add to the disappointment key foreign ministers and heads of states will not be attending.

On the other hand- 23,000 people were consulted in 153 countries in the run-up to the summit; all actors involved in humanitarian assistance will be brought together; and there is consensus that a change in the aid architecture is needed. So how can nothing be achieved? Shabaka will be participating in the summit and will be bringing you our thoughts on the process and outcomes.